Gold prices were largely unchanged last week despite the highest US inflation print in nearly 40 years. The consumer price index (CPI) crossed the wires at 6.8%, matching analysts’ estimates. That is up from October’s 6.2% y/y figure. The yellow metal tumbled in late November when the Federal Reserve shifted to a more hawkish stance, and prices have since been contained to a tight range near 1780.

Bullion traders are turning their attention to the upcoming Federal Reserve interest rate decision due out Wednesday. While no change to the benchmark rate is expected, the Fed will update its policy statement as well as its summary of economic projections (SEP). It is also expected that the word “transitory” will be removed from the statement, a concession to the sustained uptick seen in prices across the economy. Sticky inflation readings have effectively forced the Fed to acknowledge it as a threat, which has tempered market-based forward inflation expectations in turn.

The 2-year breakeven rate fell slightly through the past week, while the 5- and 10-year rates rose marginally, although they remain well below levels seen in November. This shows the market expects prices to ease in coming years as central bank rates increase. Still, the market-based inflation measures remain above the Fed’s target range, with the 2-year rate at 3.23%. This will help support bullion, but it likely isn’t enough for a significant rally as traders seek yield elsewhere. That is unless the market losses confidence in the Fed’s ability to tame rising prices. 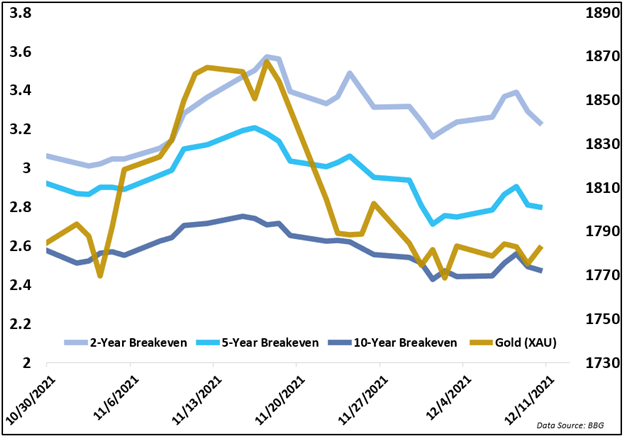