The Canadian Dollar had quite the week as it was once again at the mercy of dollar dynamics. The Loonie has held up much better than other USD peers given the extremely hawkish nature of the Bank of Canada, which has moved in-step with the Federal Reserve. Despite a severe pullback in oil prices of late, the Canadian Dollar has failed to weaken considerably against its neighbor. The Bank of Canada has tightened considerably with the Federal Reserve, even going as far as hiking by a full percentage point recently to help cool inflation. This aggressive action by the BoC has helped elevate Canadian yields, which has prevented spreads to US Treasuries from blowing out.

As we look into next week, we may be at the mercy once again of USD flows. In remarks given on Friday at the Jackson Hole Economic Symposium, Fed Chair Jerome Powell reinforced the Fed’s commitment to returning inflation to their 2% target. In his brief yet profound remarks, Powell revealed that there may be pain for US households as higher borrowing costs filter through to the broader economy. He also went on to say that the current Fed Funds level is “no place to stop or pause” while also reinforcing that rates are headed “to a level that will be sufficiently restrictive to return inflation to 2%.” These comments may put a fresh bid in to the Greenback, which is already bolstered by major weakness in China and continental Europe.

While the USD looks set to remain bid thanks to significant weakness in the Euro and in Sterling, USDCAD could poke lower should a renewed bid materialize in oil markets. Rumors have surfaced of late about potential OPEC+ production cuts, as comments out of Saudi Arabia hinted at a potential disconnect between paper and physical markets. A sustained push for WTI back through $100/bbl could help turn USDCAD lower, despite Fed Chair Powell’s hawkish remarks on Friday. 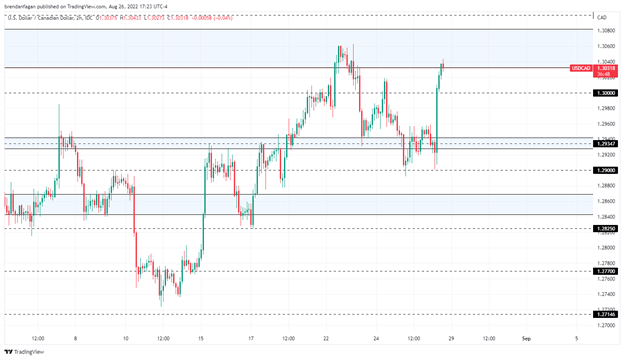 On the daily timeframe, we can truly observe a major liquidity zone around 1.3050 at work. Price has entered this area above 1.3000 on multiple occasions since May, with each advance notably being rejected. This will certainly be an interesting area to watch as we head into next week, as Jerome Powell may have talked the US Dollar into yet another leg higher. Price remains supported by the 50 SMA at 1.2913, while overhead resistance looms above 1.3050 and into 1.3100. Friday’s final price of 1.3034 is the highest weekly close for USDCAD since November 2020. 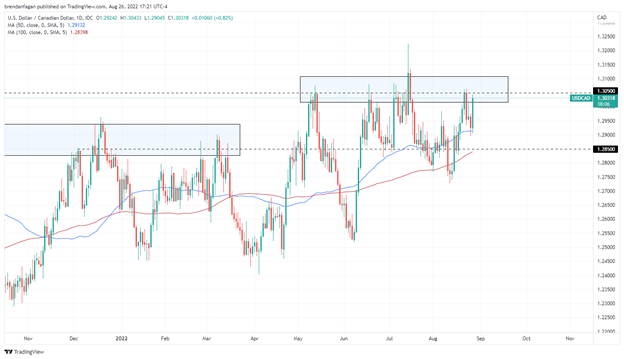