USD/JPY False Break, or is Momentum Still There?

USD/JPY made a 3½-year high when it took out the November 2017 peak this week.

Having made the high at 114.971, it then promptly made a Bearish Engulfing candlestick.

On Tuesday, the price closed above the upper band of the 21-day simple moving average (SMA) based Bollinger Band. The following day it closed back inside the band. This could suggest that bearishness might unfold.

Looking at where the price is and the arrangement of the 10, 55 and 200-day SMAs, all of these conditions have been met. A caveat to this bullish TMA is location of the 21-day SMA.

Although not in this TMA study, it none the less is an SMA of significance and currently has a flat gradient. The 10-day is also very slightly below it, but a move higher today or tomorrow might see it cross above the 21-day SMA. Such a move may see the gradient of the 21-day SMA turn positive.

It should be noted though that past performance is not indicative of future results. 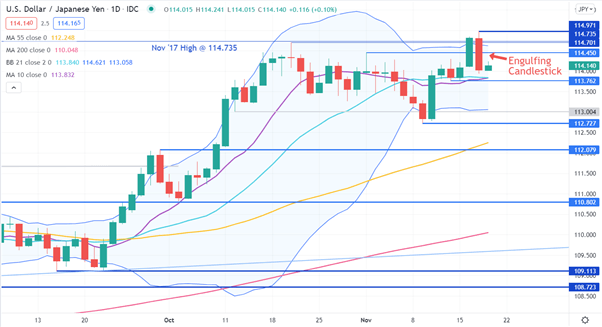 Gold Price Outlook:Gold prices have rallied sharply, seemingly disconnecting from US yields and the US Dollar.However, with gold volatility,...

USD/JPY, CHF/JPY. Are the Pullbacks Reversals?

Japanese Yen, USD/JPY, CHF/JPY - Talking PointsUSD/JPY put in a multi-year high to start 2022 but has since dived...