US jobs report better than the first look

It will be an early close for Forexlive this weekend as our technology staff takes over with some changes.

Today the focus was on the US jobs report and although payrolls was much less than expectations at 210K vs 550 estimate, there was nevertheless some underlying strength.  Prior month revisions added 82K. The unemployment rate fell to 4.2% from 4.5%. The participation rate saw a jump to 61.8% from 61.6% and the underemployment rate fell to 7.8% from 8.4%.

Wages remain elevated although lower than expectations at 4.8% year on year vs 5.0% estimate.

Although there is some weakness, the market seem to be more focused on what happened earlier this week when Fed Chair Powell pivoted from his long standing view that inflation was transitory, to one that it is now not transitory, but likely to persist further into 2022.  As a result, he is on board for a faster taper starting in December and seems to be open to tightenings earlier as well.

Other Fed officials hopped on that bandwagon and it seems a fait accompli that tapering will indeed increase to at least $30 billion per meeting in December. Remember the current pace of bond buying is still at $105 billion. At a pace of $30 billion, the Fed will be finished tapering by the May 4th meeting, and open the door for the first tightening as soon as June.

In reaction to the new view, rates moved higher in the short end this week, and declined in the longer end. The two year yield moved back up to 0.65% after trading as low as 0.441% on Tuesday. Meanwhile the 10 year yield moved to its lowest level since September 23 at 1.387% in trading today. The two – 10 year spread is trading below 80 basis points.

US stocks reacted unfavorably to the new tightening bias and is trading at session lows as London/European traders exit. The NASDAQ index is trading down -2.70% today, and has moved back below its 100 day moving average at 15081.67. The S&P index is also lower but only by -1.46%. The index remains above its hour 100 day moving average of 4491.12. European indices close lower after trading up over 1% earlier in the day.

In the forex market, the CHF is the strongest while the AUD is the weakest. 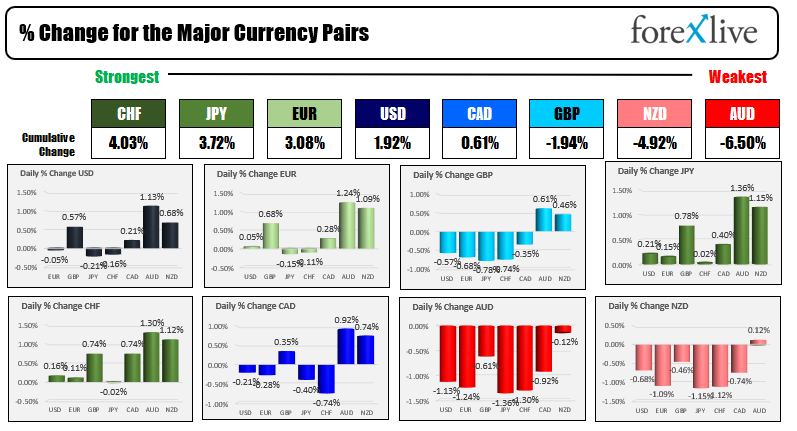 It's still all about risk sentiment as we the week stretches out. Bond yields remain elevated and I'd expect...

BOJ’s Kuroda: Will ease monetary policy without hesitation if needed

The population game is one that all countries in the world are playing but few - if any at...

A weekend series of tweets from Bill Ackman, founder and CEO of Pershing Square Capital Management: Ackman is not...