US Dollar Wobbles After China Cut Rates and Ahead of Jackson Hole. Will USD Make New Highs?

US Dollar Wobbles After China Cut Rates and Ahead of Jackson Hole. Will USD make New Highs?

The US Dollar made fresh high before it gave up some ground today after rate were reduced in China. The upcoming Jackson Hole symposium may provide cluses for USD direction.

The US Dollar pulled back from a five-week high after the Peoples Bank of China (PBOC) cuts rates today.

The moves lifted China’s CSI 300 and Hong Kong’s Hang Seng indices, while other APAC equities languished. The commodity and growth linked Aussie and Kiwi got a boost while the US Dollar saw some selling pressure.

The cuts come in the face of continuing economic impacts of a zero case Covid-19 policy and property sector woes. Residential mortgages are most impacted by the 5-year rate and the 15-basis point change reflects an attempt to restore borrower confidence.

The detraction in activity has been compounded recently by dry weather that has cut hydro electricity production.

China’s Sichuan province is an industrial powerhouse that has been hit particularly hard by the energy outages. The limits on usage for manufacturers has been extended from Saturday to this Thursday.

Crude oil slipped in the Asian session as speculation mounts that Iranian supply might be coming back online to offset the loss of Russian production. The Brent futures contract dipped under US$ 95.50 bbl and the WTI contract is below US$ 90 bbl.

Gold has continued lower after Treasury yields added a few basis points across the curve to start the week. It is trading around US$ 1,744 an ounce at the time of going to print.

The market will be focused on the Jackson Hole symposium which begins on Thursday. This time last year the Fed labelled accelerating inflation as transitory. This year, the alarms bells are ringing on eye wateringly high inflation becoming entrenched.

The language will be closely watched for clues on how determined the central bank is to get inflation back toward their goal of around 2%. Previous gatherings have had significant impacts on policy expectations.

Perhaps more bigger picture views will be expressed rather than stipulating what to specifically expect at the September Federal Open Market Committee (FOMC) meeting.

Wall Street futures are pointing toward a soft start to their cash session.

Two recent peak toward the 20-year high at 109.30. A level that may offer resistance.

Bullish momentum might be supported by several simple moving averages (SMA)that remain below the price and maintain positive gradients. 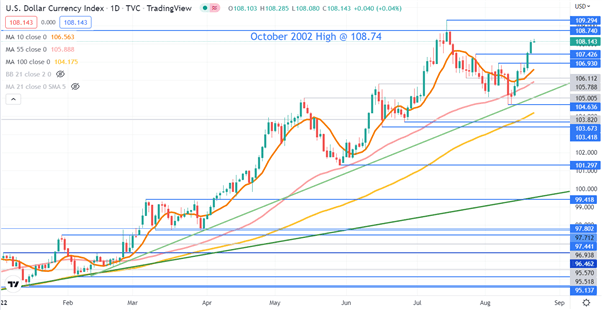