The US Dollar continued its advance against the Singapore Dollar this past week, though it trimmed a lot of its gains towards the end. Negative RSI divergence was showing that upside momentum was deteriorating, hinting at a turn lower. USD/SGD also left behind a Hanging Man candlestick pattern, subsequently finding downside follow-through. This could hint at further losses to come. But, prices were unable to drop below the former 1.3986 – 1.3946 resistance zone. Confirming a breakout under the latter could shift the outlook increasingly bearish. Otherwise, the 78.6% Fibonacci extension at 1.4115 would be key resistance above. 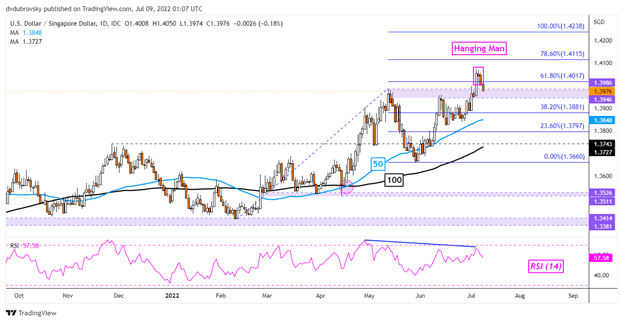 The US Dollar extended its aggressive advance against the Philippine Peso this past week. In fact, USD/PHP rose 3.85% over the past 3 weeks. That was the best performance over the same timeframe since 2000! However, on the daily chart, USD/PHP left behind a couple of Shooting Star candlestick patterns. These are clear signs of indecision, coupled now with negative RSI divergence. Still, the uptrend remains notably intact. Keep a close eye on the 20-day Simple Moving Average (SMA) in the event of a turn lower. Breaking under it could shift the outlook increasingly bearish. 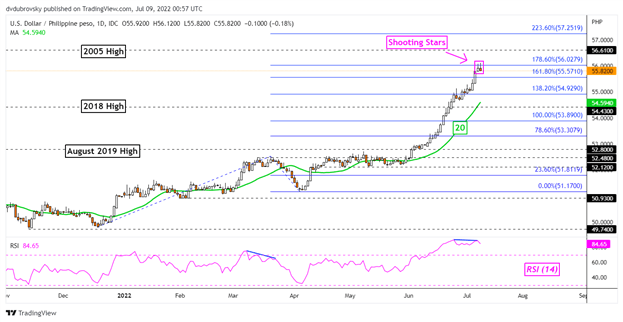 The US Dollar closed at its highest against the Indonesian Rupiah since May 2020 last week. This left USD/IDR above the key 14915 – 14975 resistance zone, which is made up of September 2020 peaks. Still, the pair did leave behind a Shooting Star candlestick pattern. This is coupled with negative RSI divergence. Combined, these are making early warnings of a top. But, the uptrend notably remains intact. A confirmatory close under the 20-day SMA could shift the outlook increasingly bearish. Otherwise, the 161.8% Fibonacci extension is above at 15145. 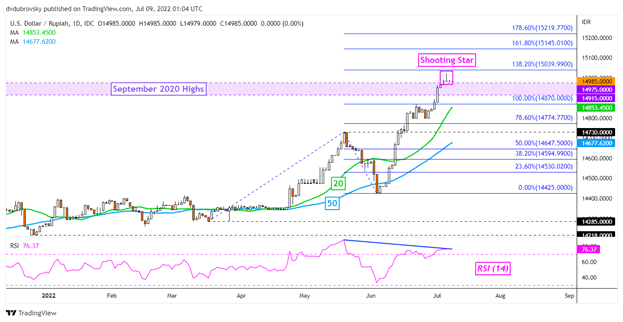 The US Dollar pulled forward against the Thai Baht this past week. USD/THB was unable to hold a push above the December 2016 high at 36.08 however. Still, the uptrend remains intact without signs of fading momentum in RSI. A pushback above the December 2016 peak would subsequently expose the 2015 high at 36.668. Otherwise, keep a close eye on the 20-day SMA. The latter may hold as support, reinstating the dominant upside focus. 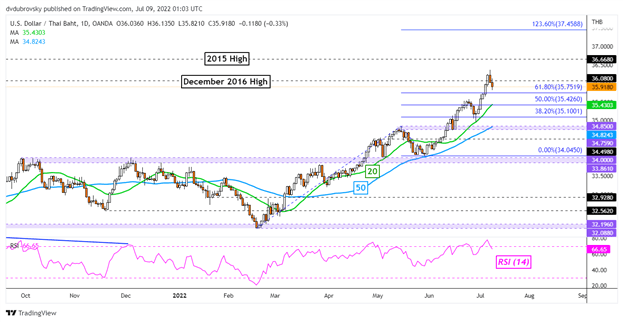 Technical vs Fundamental Analysis in Forex

Understanding the differences between fundamental and technical analysis in forex tradingThere is a great debate about which type of...

Looking for a Bullish Break?

Gold, XAU/USD, Silver, XAG/USD - Technical Outlook:Gold and silver continue to tread their respective ranges.On their own, this month’s...

Bitcoin Technical Outlook: Down But Not Out