The Fall Before the Fall

S&P 500 and Nasdaq 100 Technical Outlook: Watch How a Bounce Unfolds

The market has been rolling over hard the past few days and on that we may be in the beginning stages of another major bear leg lower. The thinking has been that the summer rally was going to eventually stall within the context of an ongoing bear market that started at the beginning of the year.

The S&P 500 turned lower from the 200-day moving average/trend-line/spring-time resistance, which was anticipated even if the market was to continue on higher. But given the amount of momentum we have seen it is looking more like the end of the summer rally versus a correction during in it.

With that in mind it will be interesting to see how any bounce unfolds once a short-term low unfolds. The thinking is that we won’t exceed the recent high at 4325. We could get back up to that point, but is unlikely a sustained move beyond it could develop if this is the beginning of a fall swoon.

Looking lower, it is hard to find quality support in the current vicinity so we will need to monitor price action closely for potential short-term lows should a larger move develop. Within the framework that this is the beginning of renewed weakness, the anticipation is that we will see the low at 3636 taken out at some point this fall. 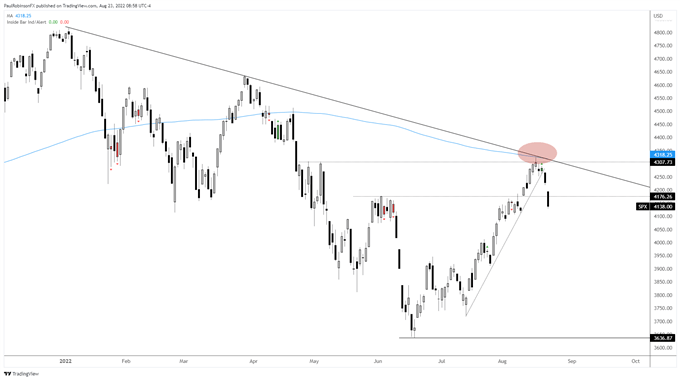 The Nasdaq 100 will almost certainly be the leader on the downside as it contains the market darlings as its primary driver. The channel line from late December was exceeded recently, but has failed to act as support on this down-move. The 12897 level is a level to watch right now, the market is currently trading right on it. There is some support to watch around 12150/50 level, a fair distance down but could come into play quickly. Broadly speaking, looking for the 11037 low to get broken this fall. As long as 13720 isn’t exceeded then the bearish outlook will stand from where I sit. 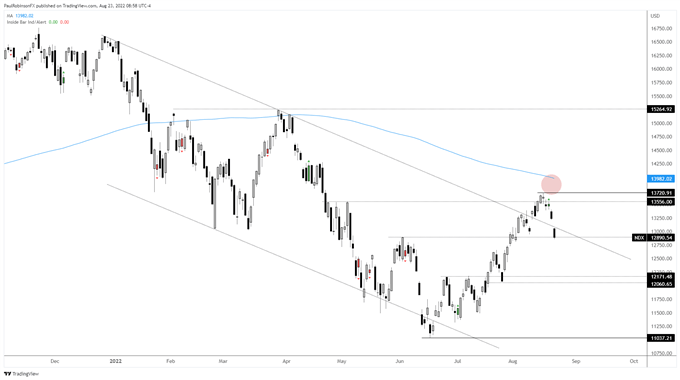