The Australian dollar ended the week on a relatively positive note considering the fact that Australian manufacturing and services PMI’s for July declined. Both prints remained above the midpoint 50 level (expansionary territory) but the deterioration highlights the impact of inflation and recession fears on Australian economic data. What boosted the Aussie to monthly highs was the PMI miss in the U.S. which pushed the composite and services readings into the contractionary zone. This being said, the Australian dollar being a proxy for risk in the currency space, could turn lower in the coming months should this trend continue and recessionary narrative grows.

Next week, the economic calendar (see below) is dominated by U.S. centric data with the spotlight firmly pointed at the Federal Reserve’s interest rate decision with Australian inflation the only high impact event relating to AUD. Money market consensus looks to be settled on a 75bps hike in spite of previous hawkish comments by some Fed officials which led to the emergence of a 100bps possibility. This dovish re-pricing has given the Australian dollar some support while some of Australia’s key commodity exports (iron ore, gold and coal) have shown some price appreciation. 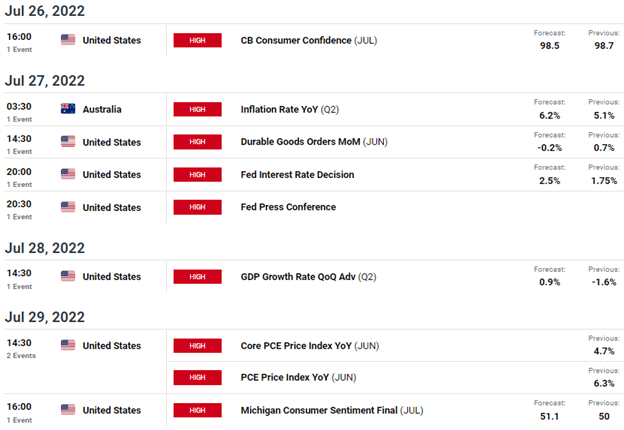 Going forward, the Aussie dollar will be torn between global risk sentiment and AUD’s pro-growth status while U.S. and Chinese growth factors play tug of war with the fate of the AUD/USD pair. 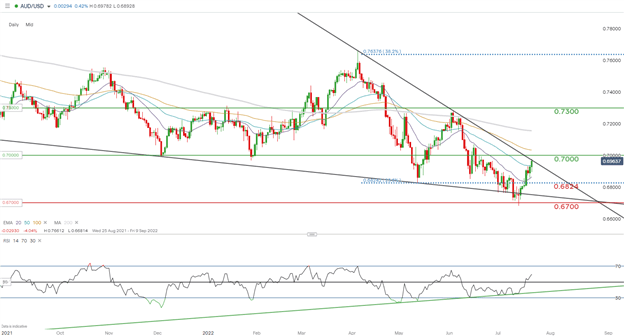 Daily AUD/USD price actionhas rallied to on Friday and now tests the longer-term trendline resistance part of the greater falling wedge-like chart pattern (black). A confirmed breakout could point to additional upside with the 0.7000psychological level being the next key resistance zone.

IGCS shows retail traders are currently LONG on AUD/USD, with 57% of traders currently holding long positions. At DailyFX we typically take a contrarian view to crowd sentiment however, recent changes in long and short positioning results in a short-term cautious bias.