The OPEC+ meeting in Vienna yesterday did not disappoint with the organization announcing a supply cut of 2MMbbls/d beginning in November 2022 and concluding at the end of 2023 – this is subject to change should circumstance necessitate. Brent crude oil expectedly rallied on the back of this announcement with pre-meeting rumors pointing to some form of reduction in supply between 1MMbls/d – 2MMbls/d.

It is important to remember that the majority of OPEC+ nations have been producing far less than their projected supply amounts this year meaning that for some nations, the 2MMbls/d cut may not even impact their current production levels. Nevertheless, major nations including Saudi Arabia will likely require production cuts.

Should OPEC+ and its constituent nations stick to the forecasted output levels, brent crude is likely to remain above the $90 handle, The U.S. has been trying to persuade OPEC+ to avoid another cut which could heighten tensions between the two major oil producing regions. The U.S. nuclear deal with Iran now carries more significance for the U.S. as a positive outcome could bring back Iran’s supply thus curtailing crude oil prices.

The potential EU ban on Russian oil and price cap could change the current dynamics so it will be important to monitor updates in this regard. From a demand side, global recessionary fears have not dissipated which may give crude oil bears some fundamental support going forward.

The U.S. dollar has also rebounded this morning after Fed officials (Daly and Bostic) did not sway from their hawkish outlook yesterday thus quelling ‘Fed pivot’ bets. A better than expected services PMI print did not aid oil bulls at the time while we focus on UK manufacturing PMI data later this morning. Further Fed speakers are on the docket today and it will be interesting to see whether they echo yesterday’s sentiments which may limit crude upside.. 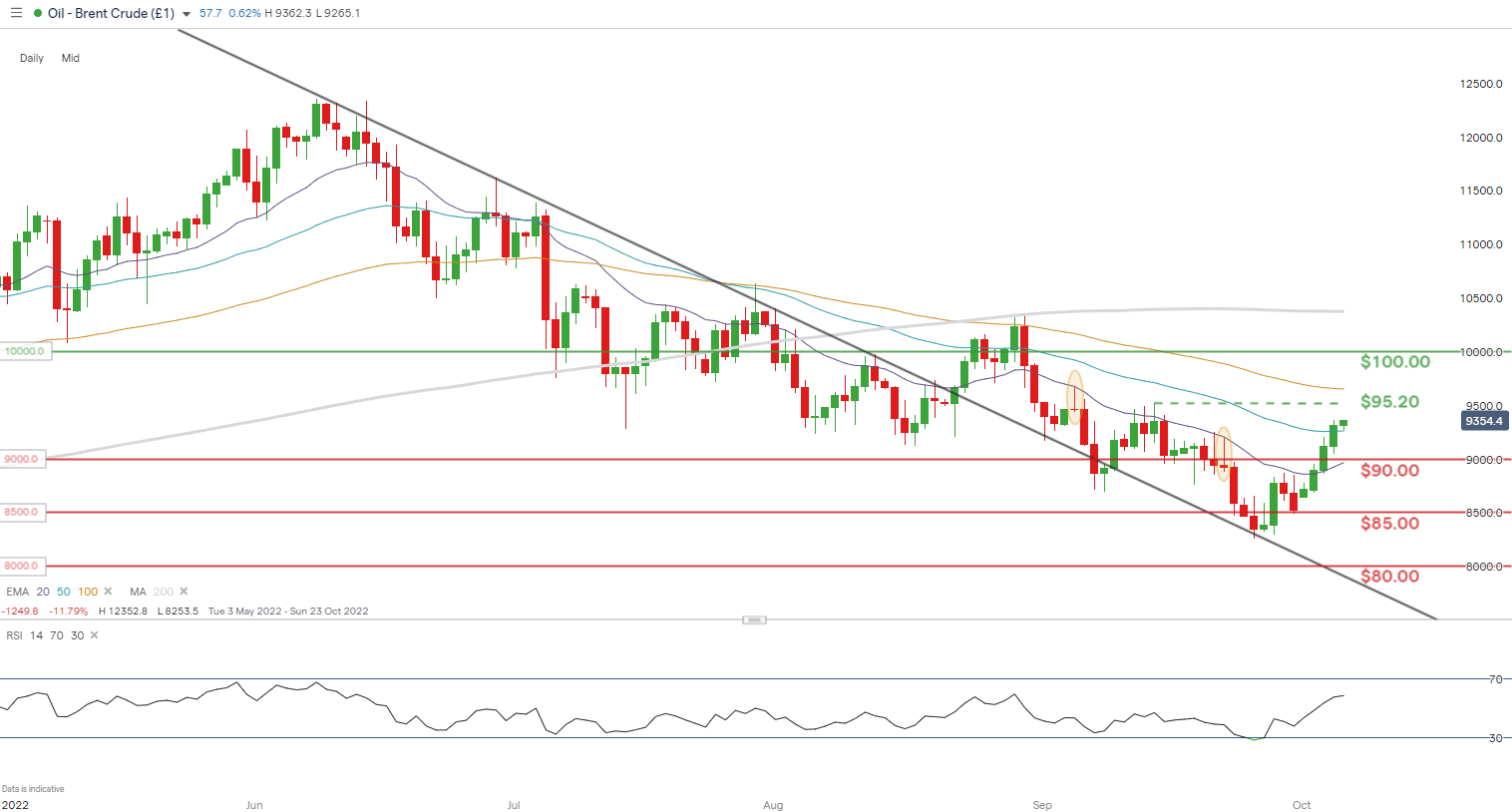 Price action on the daily brent crude chart shows the 95.20 resistance level coming into focus and a daily close above this zone may expose the 100.00 psychological handle once more.

IGCS shows retail traders are NET LONG on crude oil, with 63% of traders currently holding long positions (as of this writing). At DailyFX we typically take a contrarian view to crowd sentiment however, due to recent changes in long and short positioning we settle on a short-term cautious bias.

EUR/USD At Risk of Retreat Below 1.05 Key Level

140 Key for USD/JPY Ahead of U.S. Economic Data

A Sinking US Dollar Floats All Boats