Japanese Yen Steadies Against US Dollar and Euro. New Highs for USD/JPY and EUR/JPY?

USD/JPY remains in an ascending trend channel after failing to break above 145.

On the approach to 145 last week, the Bank of Japan made calls to banks in Tokyo asking for a rate check. This has been interpreted by the market to imply that the central bank could be looking to intervene should the price get above 145.

Of course, in the event that they do not intervene if the price trades above there, an aggressive move might be seen. The ascending trend line that currently dissects at 145.90 could be the next potential resistance level to monitor.

The low since the peak at 141.50 may provide support and has provided the base of the 2-week range of 141.50 – 145. A break of this consolidating range might provide a directional indicator. 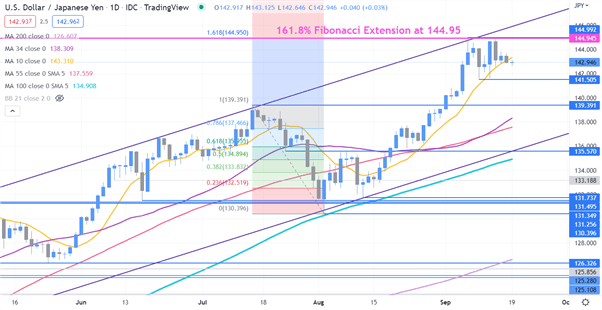 EUR/JPY broke the topside of a Pennant Formation in late August and went on to make an 8-year high at 145.65. That level may offer resistance.

The price has dropped below the 10-day day simple moving average (SMA) but remains well clear of all other period SMAs that are displaying positive gradients.

This could suggest that near term momentum is stagnant but underlying bullish momentum persists for now. A break of the 2-week range of 142.30 – 145.65 may see momentum build in that direction. 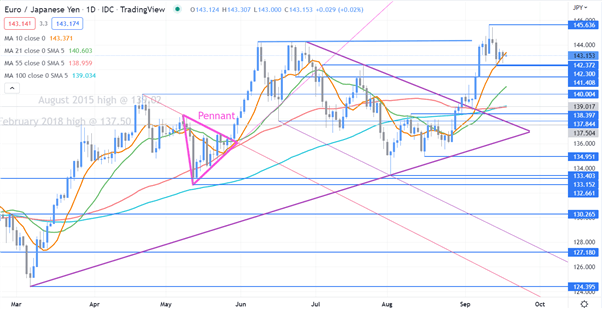