Why Should I Be Interested in the S&P 500 Index?

As a very broad index representing the leading lights of the world’s largest and most successful economy, the S&P 500 Index is extremely interesting to investors and traders worldwide, and more so than any other stock market index except perhaps the NASDAQ 100, the major American technology index.

More specifically, traders and investors like you are interested in opportunities to make money. Here is a chart and table of data showing how the S&P 500 Index has outperformed a range of other countries’ major stock market indices since the early 1990s:

We can see that stock market indices in general, and the S&P 500 Index in particular, has a “long bias” – their prices tend to rise over time. This can be contrasted with Forex, another asset class available for trading at most retail brokerages, which tends to not have any directional bias. That means that traders can enjoy a statistically positive edge by doing something as simple as trading the S&P 500 long. It takes much more work than that to build a profitable edge in Forex or commodities.

The S&P 500 Index can be traded at almost every major Forex brokerage which also offers CFDs, cheaply and reliably. With such a great historical track record on the long side, why wouldn’t traders and investors everywhere be interested in it?

As investment typically means buying and holding an asset for a period of months or years, it is important to invest through a vehicle which does not impose periodic holding costs, while spread and commission is not so important. That means that if you are investing in the S&P 500, you will be wise to not use brokerage CFDs, as these will almost always generate an overnight swap fee daily which will hugely eat away at long-term profits. Additionally, it is impractical and expensive for retail investors to buy a weighted sample of all five hundred shares, which is what would be required to replicate the index.

A practical solution for investors is to buy shares in exchange traded funds (ETFs), which closely reflect the performance of the S&P 500 Index. These ETFs own large amounts of the five hundred companies which make up the index. ETFs will almost always slightly underperform the Index due to the costs of buying and selling the shares they must own and other necessary administration, but for retail investors it is unquestionably the best option.

Some of the most popular ETFs tracking the S&P 500 Index which can be found at major stockbrokers are:

As traders are looking to profit from taking several short-term positions either long or short in the S&P 500 Index, they are much more interested in accessing an instrument which is liquid and usually has competitive spread and commission. Additional longer-term costs of holding positions, such as overnight financing fees which are often known as “swaps”, become less important.

The easiest way for most retail traders to trade the S&P 500 Index is by trading it as a CFD. Happily, many Forex brokers offer CFD trading in stock market indices.

It is useful to categorize stock markets into bull or bear markets because the historical data of the S&P 500 Index shows that you can time the market, contrary to what your stockbroker might tell you. No matter which of the previously mentioned definitions is used, bull markets have significantly outperformed bear markets. This can be useful to investors, and even more useful to traders, who might take only long trades in bull markets and only short trades in bear markets.

The S&P 500 Index has had a long bias ever since it was created. This bias has become even stronger in recent decades and suggests that only looking to buy or trade long the Index is a good approach.

The following statistics are based upon the historical daily price behavior between 1957 and 2021, which includes more than fifteen thousand data points:

The S&P 500 Index can be a great asset to day trade, although when traded as a CFD it can have a comparatively higher spread than Forex currency pairs. This means that you are probably better off as a day trader to adopt a relatively conservative trading style which enters few trades, perhaps a maximum of only one per day when conditions seem right.

Many day traders fail because they struggle with timing trade exits. The best way to deal with this is to forget about trying to get out right at the top. The best trades will keep going further and further into profit as the day goes on, so why not just sit tight until just before the day’s close and exit at that point. This can take a lot of stress out of trading and ensure you do not miss the big wins. Using a trailing stop can also be a good exit strategy.

Day traders looking for an entry strategy might do well to wait for the end of the first hour after the NYSE’s open at 10:30am New York time when the previous day closed above its open and the 50-day moving average is above the 200-day moving average, and trade this opening range breakout by putting a pending buy order just above the high of the range, and a hard stop loss just below it. 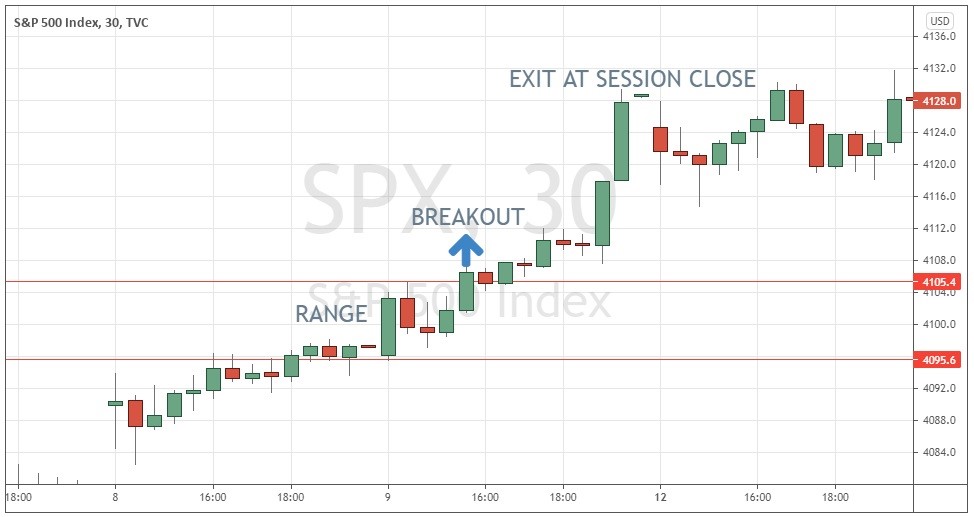 If the price reaches the stop loss before the entry is triggered, cancel the buy order, and forget trading for the day. Another trick that can be used for more profitable day trading, is to lower the position size of the pending trade entry the longer the day goes on without the entry being triggered. This helps increase profitability because the best trades get triggered earlier in the day’s trading session.

Although day traders can trade the S&P 500 Index at almost any hour of the day, it is a good idea to stick to the hours that the NYSE is officially open, from 9:30am to 4:30pm New York time, as this is usually the time of highest liquidity and volume.

Seasonality of the S&P 500 Index

Many analysts have noted that stock markets seem to tend to perform differently over different months of the year. This tendency is known as “seasonality”. One well-known expression about stock markets is “sell in May then go away”, meaning that markets often do well during the first four or five months in the year before declining over the summer.

The below table shows how the S&P 500 Index has performed on an average day in each calendar month between 1957 and 2021: 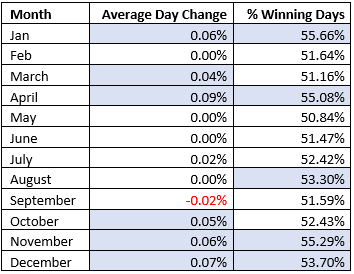 These findings show that the Index has tended to perform better early and late in the calendar year, while the summer months have typically produced little or no return. It seems that “sell in May then go away” might not be bad advice for investors. However, it would probably not be wise to let these statistics stop you taking what otherwise would seem a good buying opportunity based upon technical analysis, especially bullish momentum.

Historical data from the same period also shows that the Index tends to perform better earlier in the week, with average outperformance on Mondays and Tuesday, while Friday has been the only day of the week which has averaged a negative performance:

Again, it is worth being aware of these statistics without trying overly hard to base a trading strategy upon them.

Traders do not need to pick stocks to profit from the stock market but can instead trade broad market indices such as the S&P 500 to diversify away some market risk while being exposed to the strong upside in stock markets seen over recent years and decades. Now that most Forex brokers offer trading in the world’s largest and best-performing Index, the S&P 500, retail traders can join in and take advantage of the opportunity. Due to the Index’s recent long bias, trading short should be done with extreme caution, if at all. Plenty of money has been made trading the Index long after bearish retracements begin to turn around on the daily chart.

You can invest in the S&P 500 Index easily by purchasing shares in any of several ETFs (exchange traded funds) which own shares in the 500 component companies and are designed to closely mirror the performance of the Index.

How Do You Trade in S&P Futures?

You can trade in S and P futures in the same way as you can trade in an S&P 500 CFD, you just need to open an account with a broker which offers direct trading in S&P 500 futures. These brokers tend to be based in the U.S. and require larger minimum deposits than Forex / CFD brokers.

The S&P 500 Index has produced an average annual return of approximately 8% since 1957, which is generally considered to be a good historical performance for an investment. Whether it remains a good investment depends upon your view of the future of the largest corporations in the U.S.A.

What is the Golden Cross Strategy & How Does it Work?

Stock market indices are popular with traders because they have a long bias: stock markets tend to rise over...

How to Avoid Forex Trading Losses in [year]

It is a fact that most independent self-funded traders are unprofitable. For example, Forex brokers required to report on...

How to Count Pips on US30 – Everything You Should Know

Pips are the smallest price changes for a currency pair or other financial instruments, though there are fractions called...

How to Count Pips on NAS100 – What You Should Know

When trading on the NASDAQ Index (NAS100), it’s important to understand how to count pips. You will learn all...

How to Count Pips on GBP/JPY – What You Should Know

If you want to be a Forex trader, you have to understand what pips are and how to count...