Gold Vs. US Dollar: Transitory or Not?

June’s FOMC meeting may have been short on actual policy change details, but it led to a whirlwind of activity on global markets.

The Federal Open Market Committee was unanimous in leaving its benchmark rate at 0-25%, where it has been since the worst days of the pandemic last year. Its forecast for when we might see rate hikes was brought forward from 2024 to 2023. The individual expectations of committee members point to the possibility of two rate hikes in 2023. After the largest surge in consumer prices in over a decade, the Fed also raised its headline inflation expectation from 2.4% in March to 3.4%, despite holding firm to the expectation that inflation pressures will prove to be transitory.

The US dollar index surged by around 1% on the day and has been as high as 2% since the meeting. Commodities sold off almost across the board barring oil, which held on to its recent gains. Gold and copper were both down by over 5% by the weekend, meanwhile silver was down close to 7%. The worst performing sectors included basic materials, down 5.6%, financials, down 5.8% and metals & mining, down over 9%. Value underperformed growth; the Russell 2000 was down around 3.5%, while the Nasdaq barely budged from its highs. This has prompted some commentators to suggest that we could be seeing the end of the reflation trade, as well as the end of the rotation from growth to value.

As far as when the Fed would begin reducing its $120 billion in monthly asset purchases, Fed Chair Jerome Powell stated that June’s meeting was more a “talking about talking-about” meeting, and that “substantial further progress is still a ways off,” referring to the economy. Fed’s Bullard has confirmed that tapering talk has begun and he, a voting member in 2022, has shifted from a neutral to a hawkish stance.

The dollar index rallied on the day and made three consecutive higher daily closes from Wednesday onwards to close the week out at 92.3. This is a higher high relative to early May’s bounce to 91.3, as well as a convincing break above the 20-, 50-, and 200-day moving averages. It’s also the most overbought the index has been since late March when it reached as high at 93.4. In fact, we’re seeing divergences at both the 4-hour and daily timeframes between price levels and RSI. In other words, the index is more overbought now than in March, despite March’s peak being significantly higher than the present one. 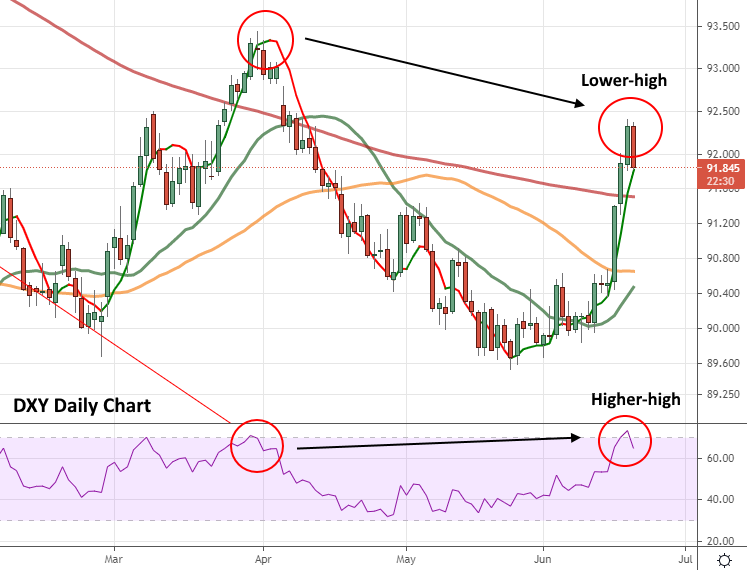 Gold has almost been a mirror image of the DXY. The yellow metal faltered at the $1860 level and put in three consecutive lower closes to end the week at around $1760. The sell-off, which began on June 11, gathered pace on the concluding day of the FOMC meeting. The move down has seen gold crashing through the 20-, 50-, and 200-day moving averages to set its lowest daily close since April.

You may recall the double-bottom that gold formed in early and late March around the $1676 level. The current price action is the most oversold gold has been since the first of those two bottoms on March 8. Furthermore, the most recent sell-off has led to an RSI divergence between the second, March 30 bottom, and the current price action. In other words, gold is more oversold now than it was in late March, despite the price in March being significantly lower. 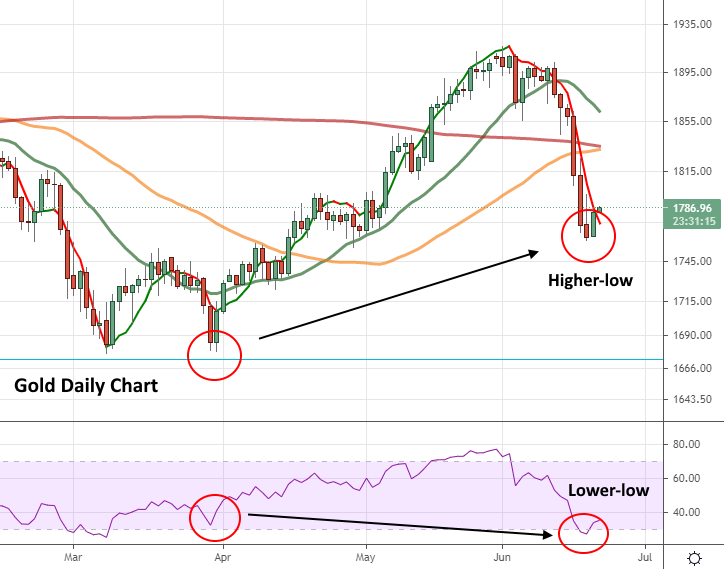 It all comes down to whether the inflation that the Fed is being forced to now acknowledge is to be a transitory phenomenon or something more sustained. Nothing has materially changed; the Fed has done nothing other than express the likelihood of a rate hike in two years’ time and its willingness to begin discussing the possibility of tapering.

Observing the way the markets have reacted, you have to think the Fed regards the meeting as a success. The markets giving most credence to the inflation narrative sold off and the dollar staging a bounce when most of the market was expecting further losses. Is this the shape of things to come, or just a correction in a broader trend? All eyes will be on the next CPI figures due to be announced on July 13 and the Fed speakers for clues as to the actual pace of US normalisation. Once the euphoria over the USD rising has faded, USD bears may well be encouraged to step back in after this latest short squeeze.

High Risk Investment Warning: Contracts for Difference (‘CFDs’) are complex financial products that are traded on margin. Trading CFDs carries a high degree of risk. It is possible to lose all your capital. These products may not be suitable for everyone and you should ensure that you understand the risks involved. Seek independent expert advice if necessary and speculate only with funds that you can afford to lose. Please think carefully whether such trading suits you, taking into consideration all the relevant circumstances as well as your personal resources. We do not recommend clients posting their entire account balance to meet margin requirements. Clients can minimise their level of exposure by requesting a change in leverage limit. For more information please refer to HYCM’s Risk Disclosure.

SOL/USD lost almost fifty percent of its value over the final two months of 2021, but another loss of...

As 2022 gets underway, Bitcoin is falling to multi-month lows. Recent high volatility in Bitcoin suggests traders and speculators...

The American stock market has seen huge gains over the past two years, with the benchmark S&P 500 Index...

Trading Forex without a strategy is like driving a car with your eyes closed. While you may get lucky...

A Decade in the Markets: A Testament to a Broker's Ethos?