EUR/USD trade back above parity as it bounces back from a fresh yearly low (0.9952), but the update to the US Retail Sales report may drag on the exchange rate as the Federal Reserve shows a greater willingness to implement a restrictive policy.

EUR/USD manages to hold above the December 2002 low (0.9859) even as a growing number of Fed officials show a greater willingness to push the benchmark interest rate above neutral, but the bearish momentum behind the exchange rate looks poised to persist as the Relative Strength Index (RSI) sits in oversold territory.

At the same time, the update to the US Retail Sales report may generate a bearish reaction in EUR/USD as private sector consumption is expected to rebound 0.8% in June, and a positive development may encourage the Federal Open Market Committee (FOMC) to adjust the forward guidance for monetary policy as Governor Christopher Wallerinsists that “further increases in the target range will be needed to make monetary policy restrictive.”

As a result, EUR/USD may face headwinds ahead of the European Central Bank (ECB) meeting on July 21 as the Governing Council prepares to implement a 50bp rate hike, and the different pace in normalizing monetary policy may keep the exchange rate under pressure as the FOMC steps up its effort to combat inflation.

In turn, EUR/USD may continue to trade to fresh yearly lows as it tracks the negative slope in the 50-Day SMA (1.0483), but the tilt in retail sentiment looks poised to persist as traders have been net-long the pair for most of 2022. 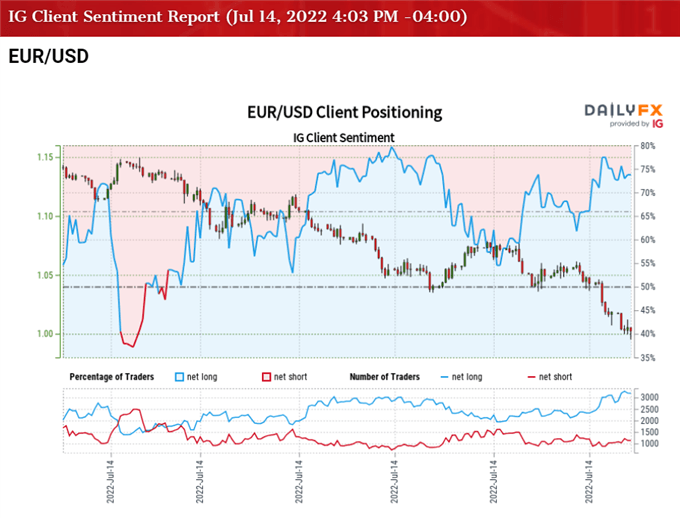 The IG Client Sentiment report shows 74.13% of traders are currently net-long EUR/USD, with the ratio of traders long to short standing at 2.87 to 1.

The number of traders net-long is 2.23% higher than yesterday and 2.59% higher from last week, while the number of traders net-short is 5.64% lower than yesterday and 1.91% higher from last week. the rise in net-long interest has fueled the crowding behavior as 72.80% of traders were net-long EUR/USD earlier this week, while the rise in net-short position comes as the exchange rate trades to a fresh yearly low (0.9952).

With that said, a rebound in US Retail Sales may drag on EUR/USD as it raises the Fed’s scope to implement a restrictive policy, and the exchange rate may attempt to test the December 2002 low (0.9859) as long as the RSI holds below 30. 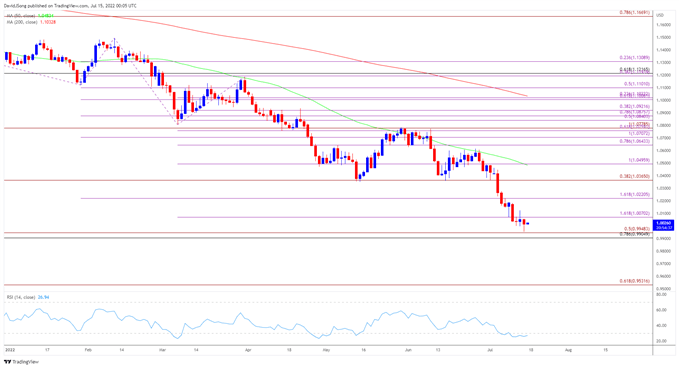