Taking a look at a majors-based Euro index, which averages the single currency against the US Dollar, Japanese Yen, British Pound and Australian Dollar, EUR remains in a downtrend. Looking outside of recent losses, the Euro has been on the decline since December 2020, but support at 1.4610 – 1.4636 has been proving resilient on the daily chart below. Positive RSI divergence has been persisting, showing fading downside momentum.

This may open the door to a turn higher, and in such an outcome there are a few key technical highlights to watch. The first is a near-term falling trendline from December 2021. Clearing higher may open the door to extending gains. Then, a further test could be had at the 100-day Simple Moving Average as key resistance. Otherwise, downtrend resumption exposes the 2020 low. 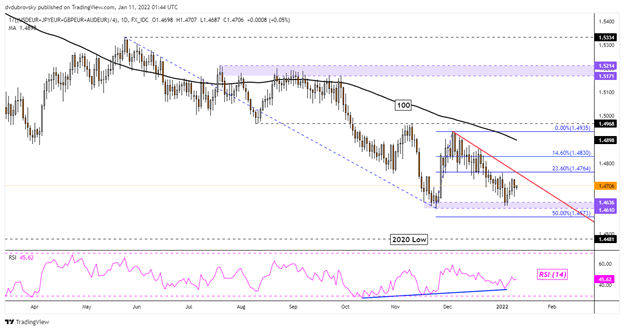 How does this translate into EUR/USD? The pair remains in a downtrend since the beginning of 2021. Lately, the pair has been consolidating. This has resulted in what appears to be an Ascending Triangle chart formation. The direction of the breakout could precede the next trend. It should be noted that a falling trendline from May is fast approaching, which could pivot the pair back lower.

Downtrend resumption entails clearing the November low at 1.1195. Not much further below that sits the June 19, 2020 low. Keep a close eye on RSI, where positive divergence may emerge. Extending losses exposes the 61.8% Fibonacci extension at 1.1074 before facing the 78.6% level at 1.0989. On the flip side, taking out the ceiling of the triangle at 1.13387 may open the door to retesting 1.1525. The latter formerly held as support in October and November before breaking down. It could remerge as resistance. 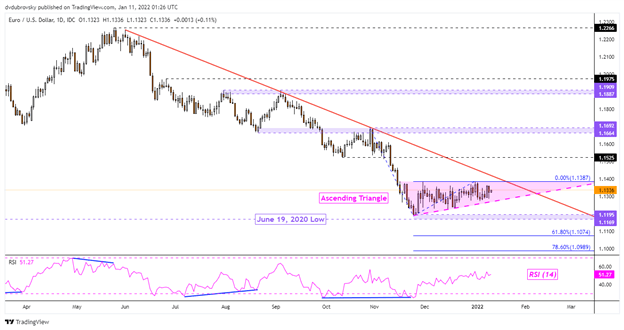 Taking a look at IG Client Sentiment, which can at times be a contrarian indicator, about 58% of retail traders are net-long EUR/USD. Since most traders are bullish, this suggests prices may continue falling. However, upside exposure increased by 16.75% compared to yesterday, while falling by 12.37% versus one week ago. With that in mind, the combination of overall and recent changes in positioning are offering a mixed trading bias. 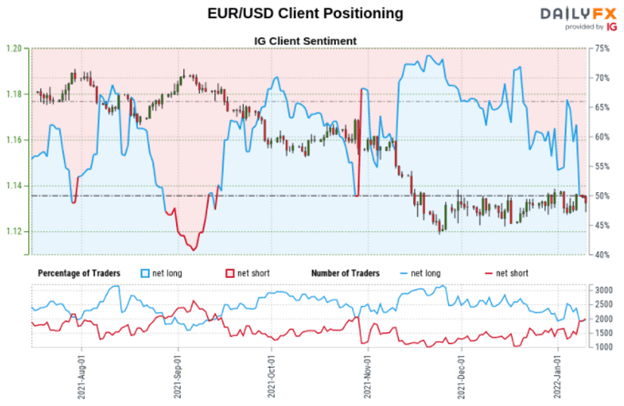 Gold Price Outlook:Gold prices are lower than where they were last week, even as US Treasury yields have settled...

FTSE 100 Technical Highlights:The FTSE is nearing its pre-pandemic highsYearly highs from 2018 and 2019 lie just beyond thereThe...