The Dow Jones Industrial Average plunged more than 7% off the August high with DJI turning negative for month. The reversal off yearly downtrend resistance shifts the focus to near-term support and the first real test of the June uptrend. These are the targets and invalidation levels that matter on the Dow Jones technical price charts into the close of the month / week. Review my latest Strategy Webinar for an in-depth breakdown of this DJI technical setup and more. Technical Outlook: In last month’s Dow Jones Short-term Technical Outlook we noted that DJI had, “rebounded off downtrend support with the recovery now approaching downtrend resistance- we’re on the lookout for possible topside exhaustion.” The index ripped into resistance on August 16th at the 61.8% Fibonacci retracement of the yearly range at 34164 with the price unable to mark a daily close above. A break of the monthly opening-range last week has fueled a decline of more than 7% off the highs with the pullback now approaching the first real test of short-term uptrend support. 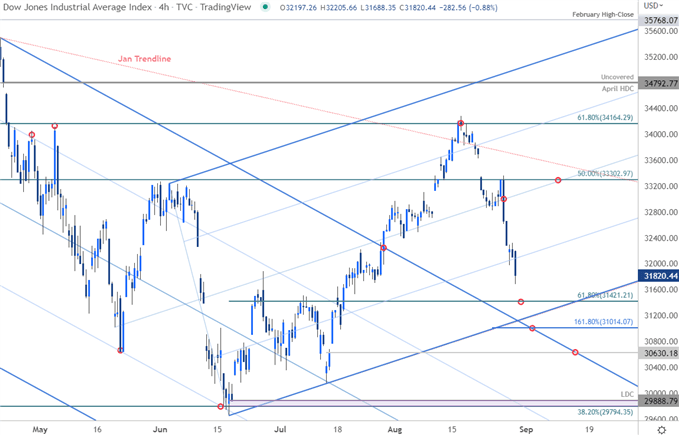 Notes: A closer look at short-term Dow Jones price action shows the index continuing to trade wtihin the confines of the ascending pitchfork formation extending we’ve been tracking since last month. A break below the median-line keeps the focus on near-term support objectives at the 61.8% retracement of the June rally at 31421 and the 1.618% extension at 31014– both levels of interest for possible price inflection IF reached. Note that a break below this formation would threaten resumption of the broader yearly downtrend with such a scenario exposing the July low-day close at 30630 and the yearly low-day close / 38.2% retracement at 29794/888. Initial resistance now back at 33302 backed by the 200-day moving average near ~33734 with a breach / daily close above the January trendline needed to suggest a more significant low is in place / a larger breakout is underway.

Bottom line: The Dow Jones Industrial Average has responded to yearly downtrend resistance with the pullback now approaching short-term uptrend support. From a trading standpoint, the threat rises for downside exhaustion on a stretch towards the lower parallels- look for a larger price reaction there IF reached. Keep in mind we are heading into the close of the month with US Non-Farm Payrolls (NFP) on tap ahead of an extended holiday break – stay nimble here. Review my last Dow Jones Weekly Technical Forecast for a closer look at the longer-term DJI technical trade levels.

For a complete breakdown of Michael’s trading strategy, review his Foundations of Technical Analysis series on Building a Trading Strategy 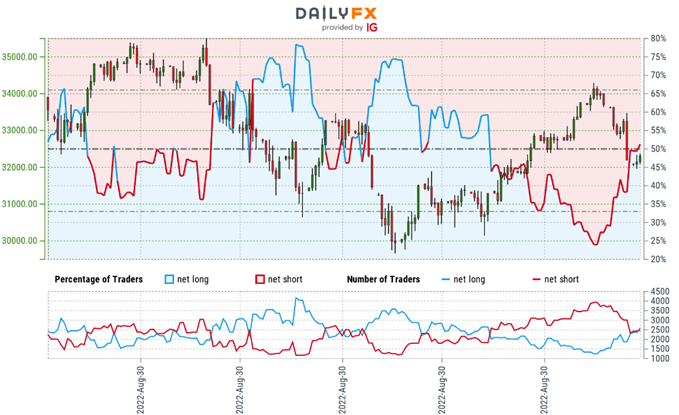