The Dow Jones Industrial Average has rallied more than 6.1% off the lows with the index now approaching technical, downtrend resistance. This is the first real test of the June rally and the focus is on possible inflection on a stretch higher. These are the targets and invalidation levels that matter on the Dow Jones technical price charts into the close of the week. Review my latest Strategy Webinar for an in-depth breakdown of this DJI technical setup and more. 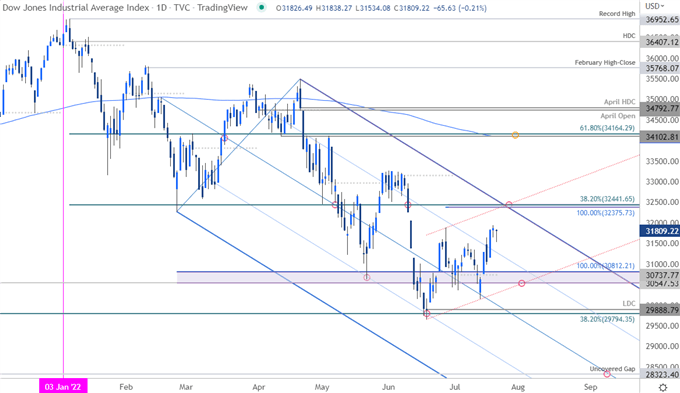 Technical Outlook: A topside breach of the July opening-range on the 19th shifted the near-term focus higher in the Dow within the confines of the broader yearly downtrend. The immediate focus is on a possible stretch towards confluent resistance at the upper parallel near 32375/441– a region defined by the 100% extension of the June rally and the 38.2% Fibonacci retracement of the yearly1 range. Looking for a larger reaction in price there IF reached. 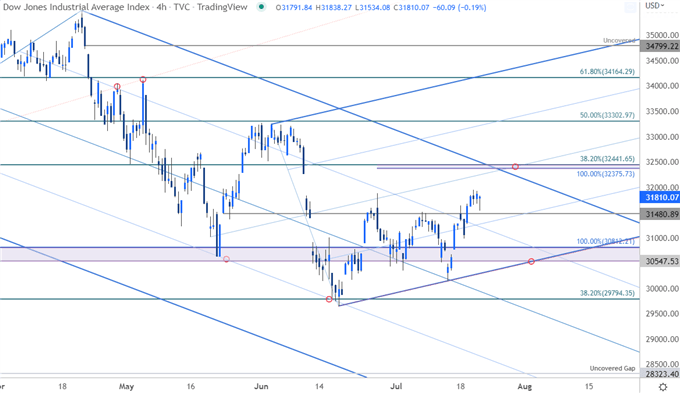 Notes: A closer look at short-term Dow Jones price action shows the index trading wtihin the confines of a proposedascending pitchfork formation extending off the lows with the median-line further highlighting key resistance at 32375/441. A topside breach / close above this threshold would be needed to suggest a more significant low was registered last month / a larger recovery is underway with such a scenario exposing 33302 and the 61.8% retracement at 34164. Initial support now 31480 backed by 30547– a break / close below this threshold would threaten resumption of the broader downtrend towards subsequent support objectives at 29794/888 and the November 2020 uncovered gap at 28323.

Bottom line: The Dow Jones Industrial Average has rebounded off downtrend support with the recovery now approaching downtrend resistance- we’re on the lookout for possible topside exhaustion. From at trading standpoint, look to reduce long-exposure / raise protective stops on a stretch towards 32375/441 – losses should be limited to 30547 IF price is heading higher with a breach / close above the upper parallel needed to clear the way. Review my last Dow Jones Weekly Technical Forecast for a closer look at the longer-term SPX 500 technical trade levels.

For a complete breakdown of Michael’s trading strategy, review his Foundations of Technical Analysis series on Building a Trading Strategy 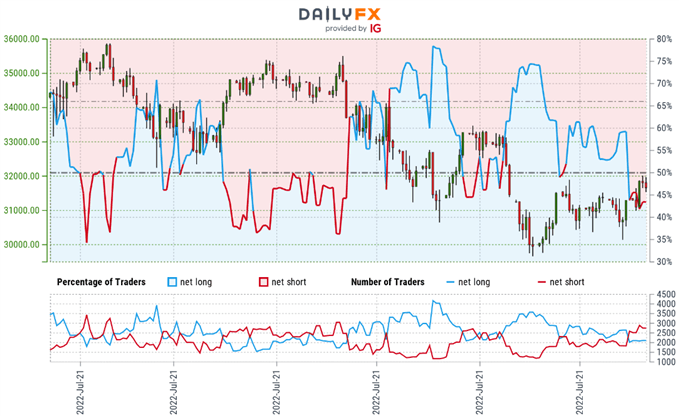