The Bank of Canada’s historic rate hike last week, the first 100-bps hike in history and the largest since August 1998 (75-bps), has helped the Canadian Dollar stage a rally through the middle of July. Whether or not the BOC retains its hawkish bias is another question, however, as policymakers have indicated that they’re front-loading monetary tightening.

For the near-term, at least, with global equity markets continuing to rally and (relative) stability in energy markets, the Canadian Dollar is on stable enough footing to continue to build on its strong performance in recent days. CAD/JPY rates are in the midst of a bullish breakout from a symmetrical triangle, while USD/CAD rates continue to trade lower from significant resistance carved out in recent months. 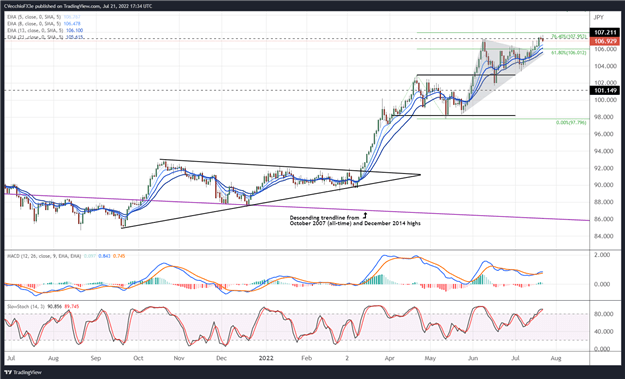 Ahead of the symmetrical triangle breakout last week, it was noted that “the technical posture remains bullish. The aforementioned range called for a measured move higher above 108.00, which has not yet been achieved, thus exists the potential for another swing higher before exhaustion transpires. A move back above the June high at 107.21 would offer a strong confirmation signal that the next leg higher has commenced, targeting the 100% Fibonacci extension of the March 2022 low/April 2022 high/May 2022 low range at 111.09.”

The pair remains above its daily 5-, 8-, 13-, and 21-EMA envelope, which is still in bullish sequential order. Daily MACD is still trending higher above its signal line, and daily Slow Stochastics are holding in overbought territory. With 107.21 broken to the upside, CAD/JPY rates remain on track to reach 111.09. 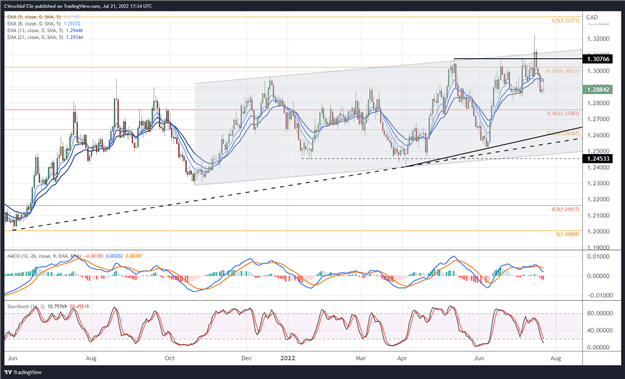 In early-July it was noted that “a move below the daily 5-EMA and former resistance around 1.2950 would suggest a short-term drop towards 1.2800 is in play.” USD/CAD rates are seeing bearish momentum build, with the pair below its daily EMA envelope, which is starting to align in bearish sequential order. Daily MACD continues to decline albeit still above its signal line, while daily Slow Stochastics have reached oversold territory. The near-term trajectory towards 1.2800 remains on track. 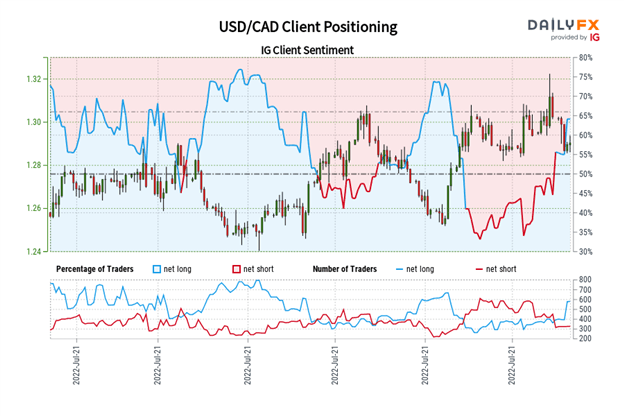 We typically take a contrarian view to crowd sentiment, and the fact traders are net-long suggests USD/CAD prices may continue to fall.

Positioning is less net-long than yesterday but more net-long from last week. The combination of current sentiment and recent changes gives us a further mixed USD/CAD trading bias.