Cable has produced a rather aggressive sell off since the bearish turnaround at the 1.2294 level where a cluster of extended upper wicks drove prices below the psychological level of 1.2000.

This week price action plummeted below the 1.1760 level with ease, stopping short of a rather significant zone of support highlighted in the red rectangle. This zone of support appears at the intersection of the pandemic low of 1.1412 and the descending trendline support.

Momentum is certainly on the side of continued downside when observing the MACD indicator, as both the MACD and signal line trend lower. The RSI however, continues to hint at positive divergence which suggests that the pair could crawl higher before contemplating a bearish continuation. Price action has made a lower low but the RSI has failed to print lower lows, subsequently making higher lows.

Weekly resistance appears at 1.1760 with support remaining at the previously mentioned zone of support at 1.1412 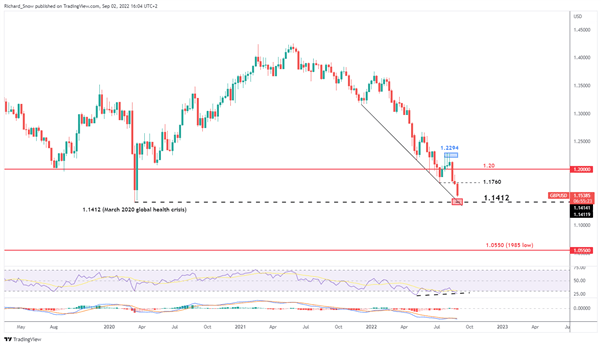 If next week sees a break below the pandemic low of 1.1412, then nothing really stands in the way of a move towards levels not seen since 1985, although, this is a very far distance from current price levels.

Cable trades at such low levels that a normal charting package was unable to produce enough data points to establish support below the pandemic low. Below is a chart produced via Refinitiv, displaying the 1985 low in red.

GBP/USD Line Chart Going Back to 1985

EUR/GBP advanced significantly this week to trade back within the ascending channel. A series of extended lower wicks set the scene for the bullish move which appears to have encountered an immediate level of resistance at 0.8670 – a level that has kept higher prices at bay many times before.

Price action also trades around the midline of the ascending channel which may serve as additional resistance in conjunction with the 0.8670. Should we see an advance above immediate resistance, the next significant level of resistance comes in at 0.8723 – a stronger level that has proven to be rather effective in acting as a pivot point.

Support appears at 0.8670 and if we are to see a retracement of this weeks move, 0.8470 becomes the next level of support. 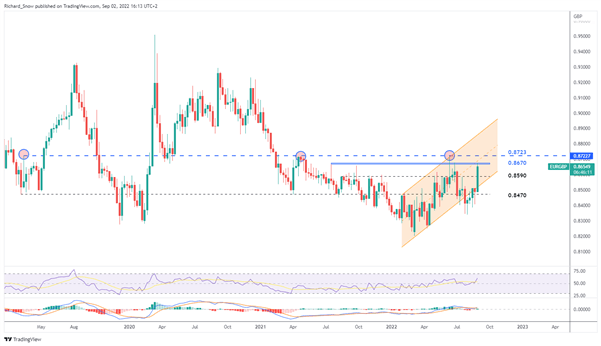