GBP/USD has recently moved lower toward a descending trend-line.

The price moved under the lower band of the 21-day simple moving average (SMA) based Bollinger Band for the second time in November.

Since July, this is the sixth time GBP/USD has done this. The observation here is the price closing outside the lower Bollinger Band. Once the price then closes back inside the Bolling Band, there might be some bullishness evolve.

In early November, the price closed outside the lower band and then closed inside the band before depreciating further. This happened for the second time in November at the end of last week.

A key component to looking at technical indicators is to ensure that robust Risk Management techniques are also employed. It should be noted though that past performance is not indicative of future results.

The recent low at 1.3354 and the descending trend line, currently dissecting at 1.3300, could provide support. 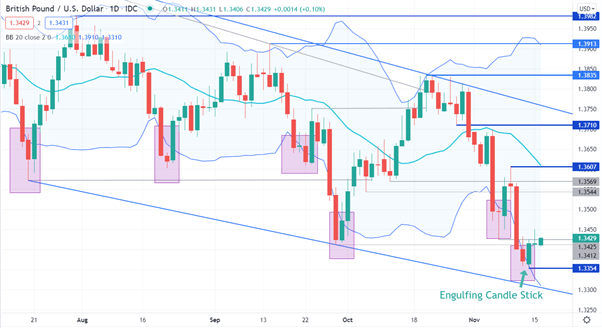