British Pound Plummets as US Dollar Roars in Risk-Off Rout. Where to Next for GBP/USD?

The British Pound is trading at levels not seen since the Bretton Woods monetary system was abandoned in 1972. The US Dollar continues to trade higher as assets perceived as safe havens are being sought.

Sterling collapsed again on Monday after the mini budget delivered on Friday has the market raising questions of the UK’s financial position after significant tax cuts were announced.

The rapid decent has led to speculation that the Bank of England might be forced to act in some way or another, be it tinkering with interest rates or physically entering the FX market to buy GBP/USD.

Last week saw intervention by the Bank of Japan when they bought USD/JPY for the first time in 24-years. Today, Japan’s Finance Minister Shunichi Suzuki hit the wires saying, “We’re strongly concerned about speculative moves, and there’s no change in our stance that we’ll respond as needed.”

USD/JPY traded back above 144 on Monday and a move above 145 will be closely monitored by the market for a reaction from the BoJ.

The ‘big dollar’ is strong across the board, making a 20-year high against the Euro.

Equity markets are mostly underwater as recession risks are appearing to be priced in by stock markets. Hong Kong’s Hang Seng index and the broader Chinese CSI 300 index are slightly in the green after Covid-19 related restrictions have eased somewhat.

Commodities have been caught up the storm with the WTI futures contract approaching US$ 78 bbl while the Brent contract dipped below US$ 86 bbl. Gold is slightly lower, trading under US$ 1,640.

Treasury yields are 3 – 6 basis points higher across the curve in Asia today.

While data might be a bit thin today, there is a plethora of central bank speakers from the ECB, BoE and the Fed that will be making headlines.

How to Trade GBP/USD

GBP/USD is in unchartered territory, having never traded this low since the currency was floated in 1972.

Not surprisingly, bearish momentum signals are strong and might indicate further weakness is possible.

Looking at any combination of SMAs, the criteria for a TMA in GBP/USD have been met. 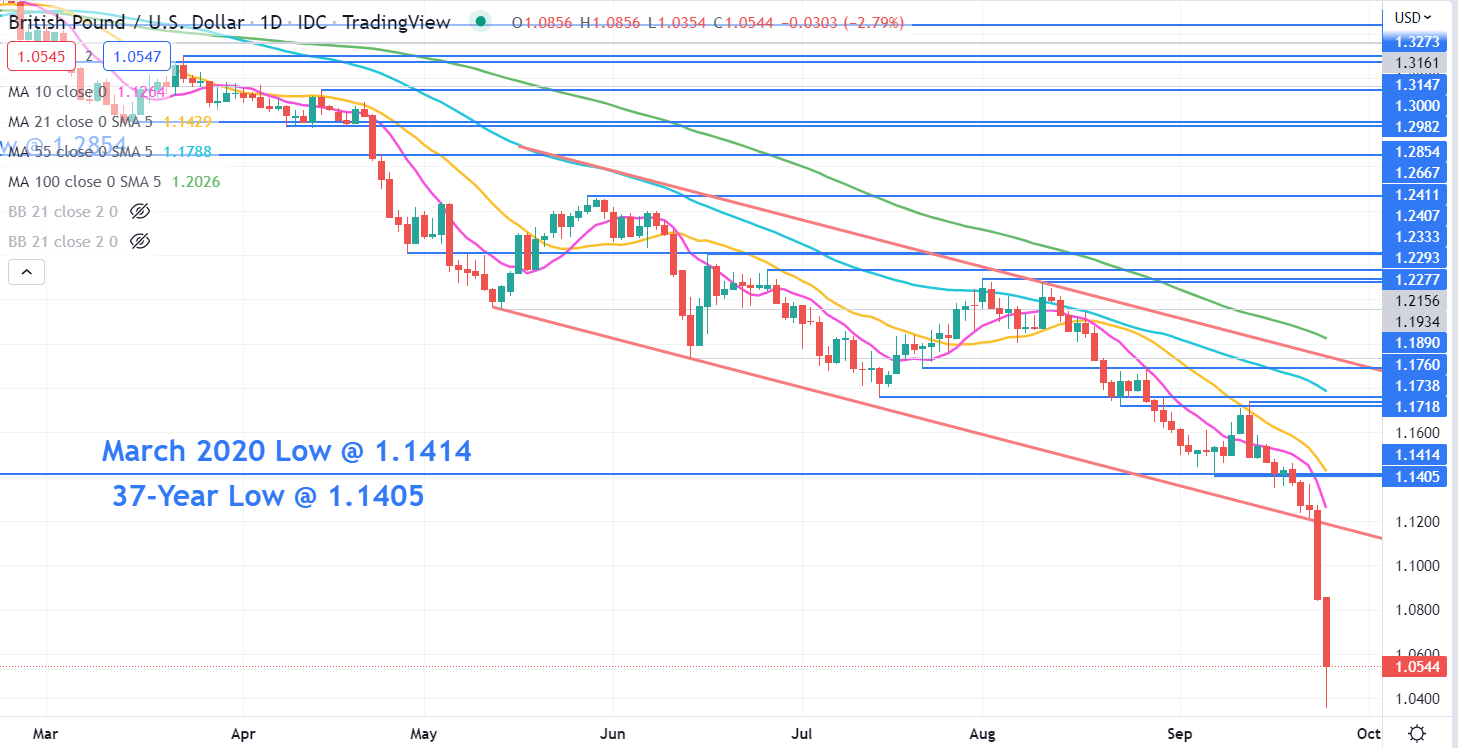