As 2022 gets underway, Bitcoin is falling to multi-month lows. Recent high volatility in Bitcoin suggests traders and speculators will see money to be made in guessing the cryptocurrency’s swings correctly. Read on to get my forecast of what Bitcoin is likely to do in 2022.

Projecting the coming twelve months results for Bitcoin may prove to be like describing a famous roller coaster you have never been on and trying to imagine what the ride will feel like. The past year has seen BTC/USD attain record high values and seen rather steep trends downward. Bitcoin remains at the forefront of the cryptocurrency world and its value as the dominant asset in the digital asset landscape is widely accepted.

Right now, BTC/USD is trading near important mid-term lows. The $43k level has been proven vulnerable over the past day, and lows from September 2021 when BTC/USD was trading near $41k are probably being looked at suspiciously by technical traders who are either looking for proven support to potentially seek reversals higher, or ambitiously targeting take profit levels via short positions to gain from the downward trajectory.

BTC/USD hit a high of nearly $69,120 on the 10th of November, only two months before this forecast was written. The ability of BTC/USD to make new highs and breathtaking dives is not new, but to inexperienced traders the price fluctuations can certainly test patience, trading endurance and staying power of speculators. BTC/USD reached a high of nearly $65k in mid-April 2020 and then touched a low at approximately $28,700 on the 22nd of June.

After June 2021, Bitcoin bounced back in large incremental steps, until reaching its apex highs in the second week of November 2021. The question of Bitcoin’s price outlook for 2022 must take these summits and dips into consideration. At the time of writing, BTC/USD is traversing dangerous support terrain which if proven vulnerable could cause more selling. If the $40k level breaks down, traders could next begin to look at the prices last seen in August 2021 when BTC/USD traded close to $37k. Historically, Bitcoin has enjoyed significant bullish runs higher and strong reversals lower.

Bitcoin enthusiasts are always heard when there is a selloff, ‘now is a buying opportunity’ because BTC/USD will certainly rise in value long term and it will continue to break records, etc. While these cryptocurrency optimists and backers may be proven right eventually, this doesn’t necessarily help short term traders who are looking for profits from their day trading desks.

Beware of allowing the opinions of those with fixed ideas and beliefs about Bitcoin to shape your Bitcoin trading.

Short term volatility when paired with overly high leverage can lead to disastrous results for speculators not using proper risk management techniques. While ambitious targets of $50k, $60k and even $70k could look reasonable on long term technical charts, reaching those levels and being able to hold onto a position for a meaningful amount of time is not easy to undertake for any trader. 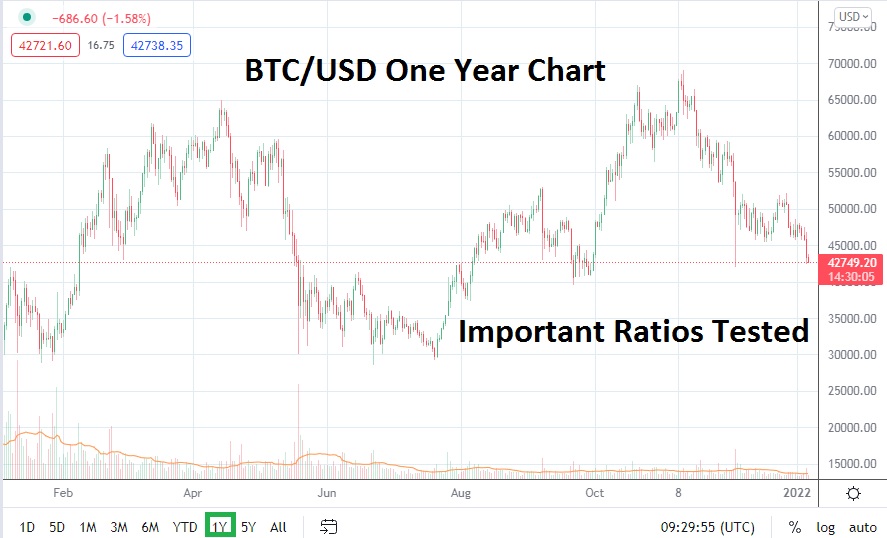 While some try to fundamentally explain the recent bearish trend which has developed in BTC/USD, technical traders might suggest that the cryptocurrency is simply doing what it has always done – provide volatility as a speculative asset. However, traders who look at long term perspectives and consider the potential for outside factors influencing Bitcoin besides the hyperbole of influencers may want to keep their eyes on potential regulatory oversight which could emanate from the U.S. and other jurisdictions.

As Bitcoin has grown in status, financial institutions and exchanges have been expanding their operations in BTC/USD, as have existing Bitcoin brokers. Chicago has created future contracts for Bitcoin which allow traders to wager on long term price projections with a high degree of volatility. Slowly and surely some financial houses are creating Bitcoin ETF opportunities for their clients, although this is quite limited so far. Still, it is certainly growing and will likely continue to expand. However, the development of the Chicago Mercantile Exchange and the likes of Fidelity getting involved in Bitcoin asset management also opens the door for more definite regulatory pressures to emerge too.

So, while euphoria grew in BTC/USD in early November 2021, we subsequently saw bearishness in Bitcoin even while a wave of new financial products was being offered to global investors. The greater focus on BTC/USD is a good thing and adds to its attractiveness as an accepted speculative asset. But the greater ability to trade BTC/USD has also added to the potential for pressure to come from regulators which may cause headwinds for BTC/USD as it evolves from a new speculative asset into a mature trading endeavor, which may create boredom for some speculators if it loses the extreme volatility for which it has become famous.

How Far Will the Early 2022 Bearish Bitcoin Trend Go?

Early 2022 saw Bitcoin reaching levels which many believe to be oversold. If that is the case, and Bitcoin begins to rebound from its price of nearly $43k or less, the price increase from there could be significant over the long term. However, before traders jump onto an expected bullish ride higher, they should take into consideration that trends in BTC/USD can prove quite durable and create cycles which technical speculators find challenging. Timing the reversal of trends in BTC/USD is not an easy task and momentum should be pursued carefully. 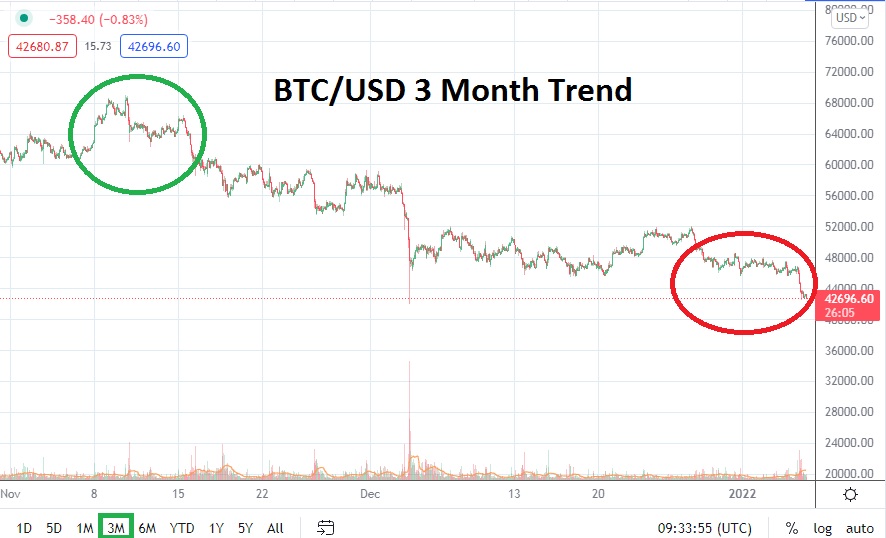 As recently as early November 2021, BTC/USD was trading at all-time high values, but at the time of writing crucial support levels are being tested. It is quite possible that BTC/USD could again test the $35k if $40k breaks down soon. High volatility causes lightning quick changes of value in Bitcoin. While many traders may not believe BTC/USD could return to values seen in late June 2021, it should not be considered impossible, this is a speculative asset.

While it is important to point out the potential for downside in BTC/USD because of its volatility, upside also must be given adequate consideration. Bitcoin continues to have many proponents. It is likely some large backers of BTC/USD would be enticed to buy more of the cryptocurrency if it falls to prices which they see as oversold. If Bitcoin bulls are proven correct and its scarcity and potential as a store for value is significant over the long term, BTC/USD will continue to attract a parade of buyers who could cause the price to spark higher.

Speculative price range for BTC/USD is $25k to $75k over the year.

We have not seen the last of volatility in BTC/USD and in the coming months it is guaranteed to deliver more.

The ability of Bitcoin to display a sudden two-month bearish trend after reaching highs in early November 2021 can be compared to what happened in April of 2021 when highs were hit too. A downward cycle of selling occurred, which saw lows reached in June and retested in July. Could January and February prove to be oversold values in Bitcoin?

The cycles of BTC/USD speculation remain historically strong. While there may be some skeptics that persist in the notion that Bitcoin is ultimately going to prove to be a failure, many of its influencers and proponents have done a solid job of ‘talking’ Bitcoin into existence, which may result in the cryptocurrency being fully accepted as a transformative asset which will allow for the ability to store value safe from devaluation by governments or central banks. After struggling with lows again in July 2021, a sudden and strong reversal developed in BTC/USD which saw it add value steadily, surpass April 2021 prices, and create new record highs.

Experienced traders of BTC/USD may be getting used to the cycles the cryptocurrency creates and delivers. Speculators who can wager on perceived lows may find an opportunity to seek and buy reversals which may produce higher values.

If Bitcoin can suddenly begin to reverse and prove resistance at $48k to $50k is vulnerable to a sustained breakout, there is more than enough evidence to show Bitcoin can test $60k again.

Sustained enthusiasm for BTC/USD is a nervous track to pursue for speculators. Traders with a long-term outlook may look at the current price ratios as 2022 gets underway as oversold and suspect that prices could be significantly higher over 2022. From a risk reward perspective, seeking upward momentum from BTC/USD during 2022 may be a logical bet. The short term remains unpredictable, but any sparks of optimism within Bitcoin could change behavioral sentiment rapidly and cause BTC/USD to march on to higher values over the course of 2022.

Bank Rate – Definition, Comparison and How it Works?

The bank rate is the interest rate charged by a central bank on borrowings to private banks. It is...

A banknote is a piece of paper that contains a nation's currency. It's a form of legal money that...

Currency bands are defined as a spectrum of exchange rates for a nation's currency that the economy's central bank...

What is a Currency? – Definition, Types & Uses

Currency refers to the standardization of money in various forms like banknotes and coins. It is a medium of...