Bitcoin and Ethereum Forecast for the Week Ahead

Get Your Free Bitcoin Forecast

Bitcoin and Ethereum both posted monster sessions on Friday as risk rallied on the back of the US nonfarm payrolls (NFP) report. The labor report broadly appears to be a “mixed bag,” as both bulls and bears can point to aspects of the print to support their arguments for higher/lower prices. Despite that, market participants were forcibly pushing risk higher during Friday’s session. US Treasury yields came in while the US Dollar posted a dismal session. Part of this was fueled by NFPs, while continued developments out of China also fueled a rebound in risk.

So where does crypto play into all of this? At the moment, its role as an “uncorrelated risk asset” roughly means that market participants are stuck following the broader macro environment. The data is ultimately driving sentiment and positioning, as it weighs heavily on market pricing of the Fed’s terminal rate. Next week sees October CPI data cross the wires on Thursday, which could bring about significant shifts in rates pricing for the December FOMC meeting.

Courtesy of the DailyFX Economic Calendar

Bitcoin continues to push higher despite volatile swings lately, following a long base that was built around the $18400 – $19000 zone. I wrote about this in previous pieces on Bitcoin, where I noted that the cryptocurrency was holding up well as other risk assets struggled immensely. That relative outperformance during a period of heightened stress in financial markets certainly caught my eye, and made me wonder why Bitcoin had diverged from traditional correlations.

After largely holding the support zone between $18400 and $18800 for most of September and all of October, Bitcoin finally made the break higher into month-end. The October 25th session finally saw a daily close above resistance at $19666, which was the 2017 swing-high. BTCUSD hasn’t looked back since making this bullish break, as price has punched firmly though the psychological barriers at $20000 and $21000 respectively. If risk continues to rally on a shift in fundamental news, BTCUSD may look to target the September high at $22781. Softness after such a strong rally on Friday may bring the support zone above $20000 back into play in the near-term. Overall, I remain bullish BTC. 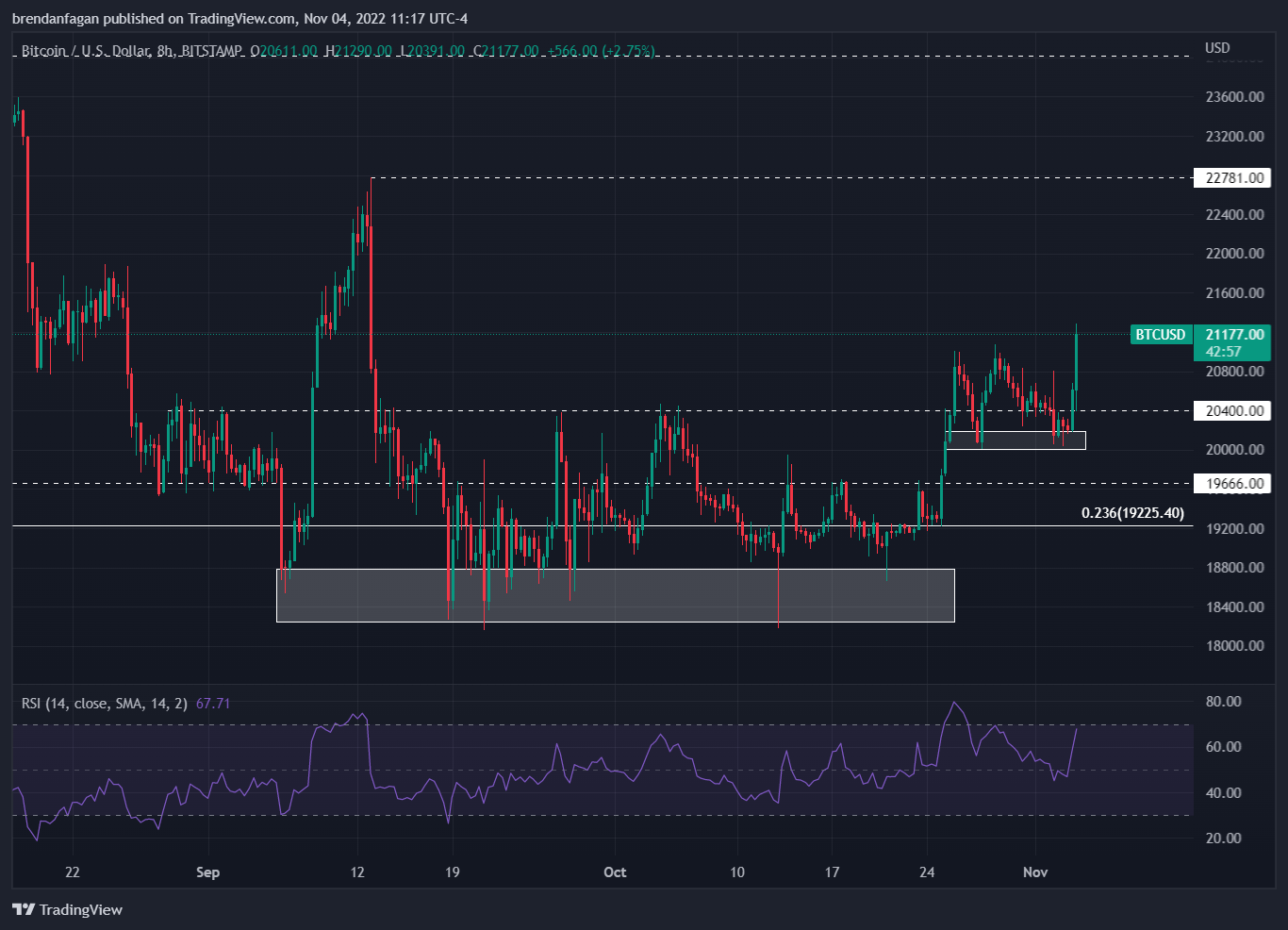 Just like Bitcoin, Ethereum has put in a monster rally after holding a major support zone for much of September. ETHUSD held the key zone just above $1200 following a strong sell-off to start September. This attempt to carve out a bottom ultimately proved to be crucial, as ETHUSD has now rallied to just short of $1700. Similar to BTCUSD, the ability for Ethereum to hold key support while traditional equity baskets slid hard during the latter half of September was eye-catching.

Ethereum has since broken above descending trendline resistance that rejected ETHUSD firmly in September. The daily close above this key trendline on October 25th has seen bullish continuation materialize, as we now trade just shy of $1700. With risk appetite improving following this week’s slate of risk events, ETHUSD may be targeting the 23.6% retracement of the 12-month range at $1821. Given the inability for Ethereum to trade back down to the lows at $880 despite the bearish environment for risk, the case for a revisit of that area remains difficult to make absent of any potential developments on crypto regulation.

Ethereum was trading just shy of $5000 this time 12 months ago, which shows just how much can change in a short amount of time. 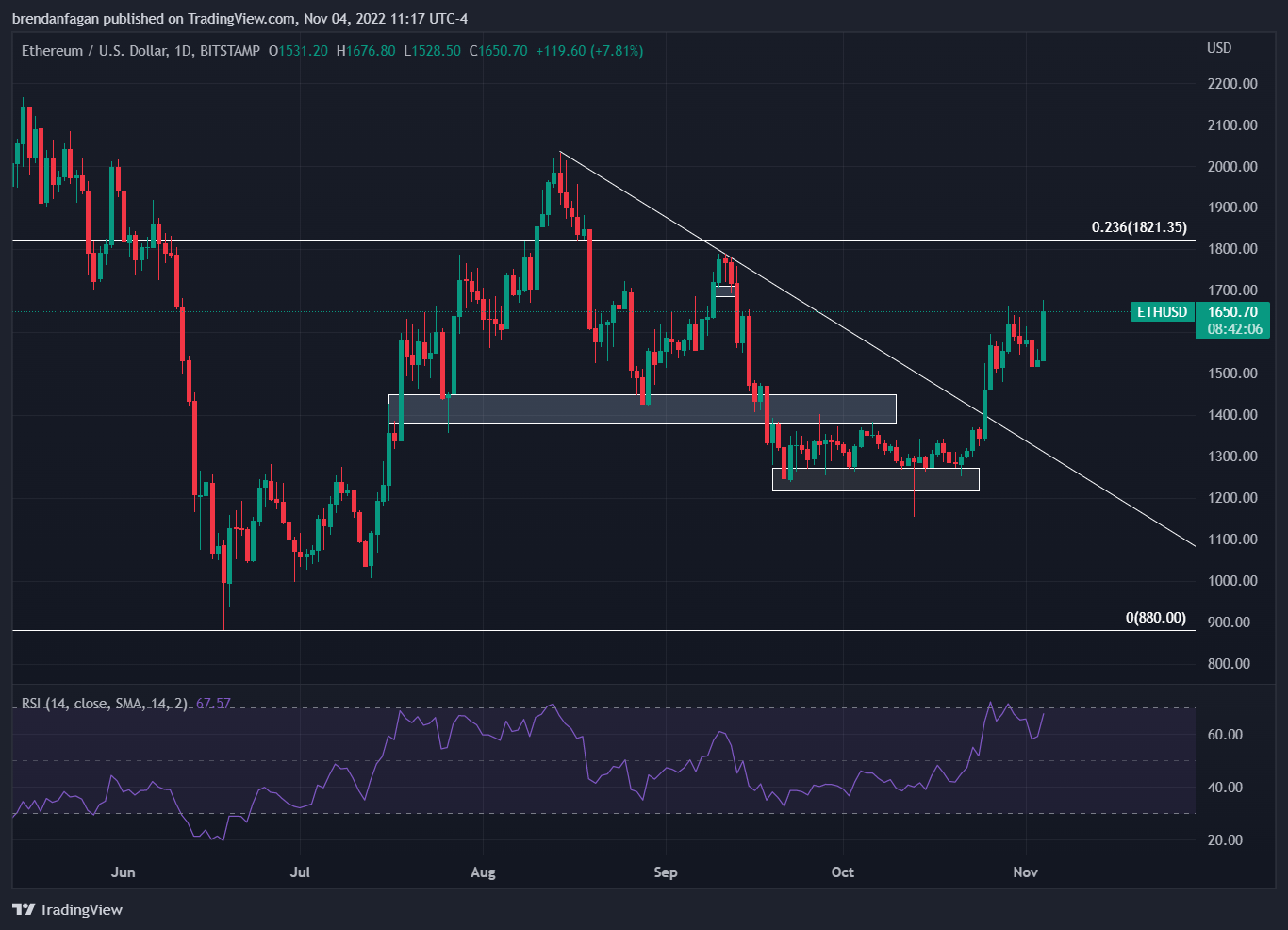