AUD/USD gained over the past week as the US Dollar took a hit from inflation data coming in not as hot as anticipated. It has broken the topside of a three-week range.

The weaker USD helped commodity prices move north with the notable exception of gold. A higher US real yield appeared to undermine the precious metal.

Industrial metals drifted higher, but it was agricultural commodities that got the extra boost from drought conditions across Europe and North America impacting prices. This has the potential to compound the impact of the Ukraine war on food supply globally.

There was little Australian data during the week, but the focus was on Chinese and US inflation figures.

Year-on-year Chinese CPI to the end of July came in slightly lower than expected at 2.7%, instead of 2.9% and 2.5% previously. PPI over the same period saw a similar result, printing at 4.2% rather than 4.9% anticipated and 6.1% prior.

The effects of rolling Covid-19 lockdowns across large commercial centres and a problematic property sector could explain the easing of price pressures.

This sent equities higher, and Treasury yields lower. The latter seemed to sabotage the US Dollar, with markets interpreting the data to allow for a less hawkish Federal Reserve.

This was quickly hosed down by several Fed speakers going into the end of the week. It should be noted that the next Federal Open Market Committee (FOMC) meeting will be in late September. There will be another set of inflation figures and jobs data between now and then, as well as the annual Fed symposium in Jackson Hole, Wyoming. It is often used to preview the broad trajectory for policy in the coming year.

The rally in equity prices also aided corporate bond spreads to narrow. This equates to an easing of monetary conditions. As stated by a number of Fed board members, this is the opposite of what they are trying to achieve at the moment.

Looking ahead, it would appear that the jawboning from Fed officials is likely to continue and this could be the propelling force for markets.

Domestically, Australian jobs data is due out on Thursday, and this may generate some AUD/USD volatility. The last read for the unemployment rate in June was 3.5%, a 50-year low. A Bloomberg survey has economists expecting 3.4%. 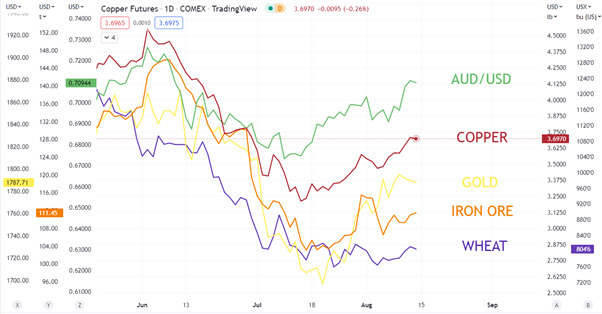