AUD/USD Dances on China CPI and PPI Gap. Will the Aussie Hold Ground?

The Australian Dollar did little in reaction to mixed Chinese inflation data, keeping the recent uptrend intact. CPI for the 12 months to the end of November came in at 2.3% against 2.5% forecast. PPI printed at 12.9 % over the same period, higher than 12.1% anticipated. This is the second highest outcome in 26 years next to last month!

This increase in the gap between the two inflation gauges presents a conundrum for policymakers. While CPI is relatively low, a high PPI can lead to rising CPI further down the track. From a macro perspective, businesses have a choice between absorbing a lower profit margin or passing on higher input prices to consumers.

A number of commentators view today’s large PPI number as being the peak. This opinion has been attributed to energy commodity prices easing from their astonishingly high levels. However, if the northern hemisphere winter is more severe, it might further impact energy prices.

Today’s data comes after the People’s Bank of China (PBOC) cut the reserve ratio requirement (RRR) by 50 basis points on Monday to 11.50%. This means that banks are now required to hold less cash and has released approximately 1.2 trillion yuan of liquidity.

The liquidity injection comes at a time when the Chinese Communist Party continues to implement their ‘shared prosperity’ policy. The policy has weighed on Chinese equity markets as many sectors are forced to re-adjust to a new set of regulations.

It appears that the banking sector is next in line for scrutiny and there is speculation that even the PBOC may come under the microscope.

While liquidity is being added domestically, the USDCNY fixing continues to allow for CNY strength. It was fixed at 6.3498 today, a notable appreciation.

For the Aussie Dollar, economic activity in China might be picking up again after a period of below average activity. Iron ore prices appear to be recovering after collapsing in the third quarter.

Looking ahead, China will release data on retail sales and industrial production on Wednesday next week. 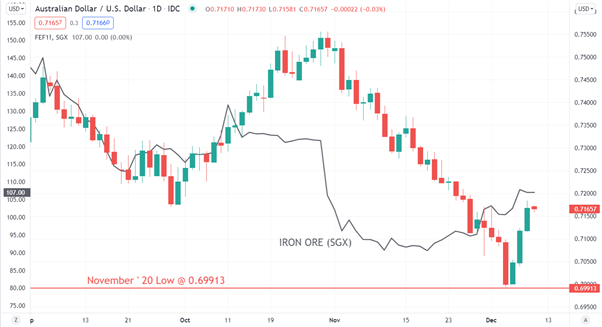