At Resistance, Parity Retest Could Come Next

It’s been about a month since the EUR/USD parity test and hold occurred, and while the initial days of the rally from just under parity brought a strong move, momentum has been quite tepid since. This type of price action coupled with the highly important and highly watched parity level suggests we will at the least see a retest.

Even if the low holds, a retest of major levels is a common occurrence in markets. In the near-term a retest may indeed hold, but longer term the broader USD forces look set to force the Euro below parity and perhaps materially-so.

Getting back to the short-term, the turn down is coming from confluent horizontal resistance dating to the 2017 low and more recent lows in March and June, along with a channel line from February. It will take a close above 10386 to get price breaking out above resistance.

On the downside, before we can start looking at the parity test the recent range needs to be violated. A firm close into the 10200s will do the trick, and at that juncture the bottom of the range at 10096 will come into focus.

At that juncture the likelihood of seeing the July low under parity tested will of course be very high. We will need to revisit at a later time as to whether just a retest before higher or a breakout to even lower levels. 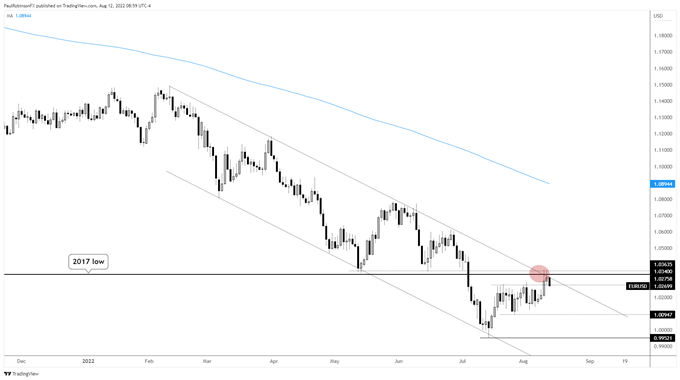